Maribou State's Chris Davids and Liam Ivory both hail from the Hertfordshire village of Potten End (that's right next to Frithsden, for those of you who need a point of reference) but didn't form a speaking relationship until they were both studying music at Leeds University. You might be forgiven for thinking that a rural upbringing may have predisposed them to songwriting which was insular and nostalgic: far from it. Their second album, 'Portraits', instead showcases the duo's inclination for making sophisticated, groove drenched deep house which is directly or otherwise influenced by a number of artists on the Ninja Tune roster which they inhabit. 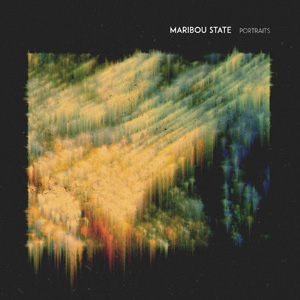 Recorded at their own studios (known, apparently, as the "Shack In The Back") the pair splice both samples and live vocals together over a hazy, relaxed minimalism. Owing much to the sandaled atmosphere of the Balearics, it's a vibe as much about as what's not there as what is, as on the light and shade of 'Steal', where guest vox Holly Walker finds herself morphed and delayed across a set of sparse but sweet rhythms. This is familiar territory, albeit at times for the connoisseur, as the likes of 'Natural Fools' and 'Raincoats' - the latter with its dub approximations and twisted female clips - are designed to be part of sessions, intermediate stages on a journey as opposed to being the destinations themselves.

If that sounds a little disingenuous, it's because the clue to record's appeal is around its title: if these are meant to be portraits, the picture itself is much more compelling when it's based on things we can touch and feel, on real people. Thus its better parts are consistently the ones that feature collaborators, as on 'Midas' (Walker's second contribution) with its warmly Latin piano loop and elegant down tempo vibe or Pedestrian's nuanced, soulful turn on 'The Clown'. The defining moment, however, arrives courtesy of the ever-brilliant Jono McCleery on 'Say More', his multi octave sprawl playing against a tumbling break and tendrils of oddball electronica. Melodrama, but not for the sake of it; it latches onto a raw spiritualism that helps stake claim for being one of the year's best songs so far.

There's probably a moral somewhere in that story about the dissociative effect of technology on musicians and music, but that's hardly relevant here: with 'Portraits', Davids and Ivory have crafted a clutch of atmospheres run through with flecks of sufficiently leftfield alchemism to keep sunsetters and boffins happy alike, with McCleery's touches of genius a standout joy.