Another weekend of stomping New Rocks, flying dreads and mind-blowing music is over for another year, but Infest 2016 will go down as one of the most memorable editions of the event's history, not least for a line-up that was as diverse as it was exhilarating. 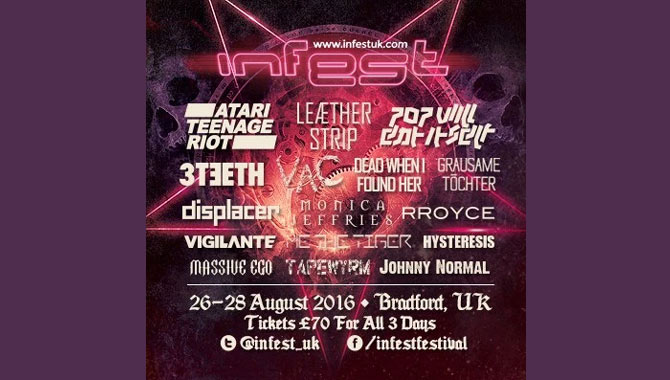 As usual, everything besides the music was spot on at the Bradford University venue. The menu gets fuller every year; you go to Infest, you will eat like a king (which is probably how this festival goer managed to stay sober). The merch stand went down a treat, and as usual the alternative clothing traders had plenty to offer in terms of jewellery, Latex, PVC, corsets and more.

All the bands were Infest newcomers this year, and many made their UK debut at the festival. Friday night began with Massive Ego, fronted by gender bender Marc Massive and accompanied by a keytar player who had a look of Billy Idol about him. The first band of the weekend always has a little comedy value, and with their 80s edge and over-dramatic performances of 'Low Life', 'Drag Me In, Drag Me Under' and 'Let Go' (written by their friend Boy George), Massive Ego were no different.

Sweden's Me The Tiger were a star-turn, however. The ethereal female vocals reached rocky heights in such tracks as 'Pocket Sized Edition Ending', 'Headlines' and 'Ariana'. Tobias Andersson's guitar playing was every bit as energetic, at one point he gave his Fender Telecaster to a man in the front row then forced him to throw it on to the stage. Guitar lovers all around winced in shock at the sound of the crash.

From what I caught of Dead When I Found Her, there was something intriguingly Skinny Puppy-esque about them - a stark contrast to follow-up band and the night's headliner Pop Will Eat Itself. With their Beastie Boys aesthetic and chart history, they were an unusual choice for Infest, but their 90s alternative sound had everyone singing along. 'Everything's Cool' was a highlight with the catchy vocals and the standard megaphone, but not so much as 'Wise Up Suckers' which almost set in motion an earthquake as hundreds of New Rock-clad feet stomped their way through the track.

The line-up has changed many a time over the years, but there's no denying there was a special kind of chemistry between these five; smiley bassist Davey Bennett, dynamic vocalists Graham Crabb and Mary Byker, guitarist Tim Muddiman and 'Car SOS' presenter Fuzz Townshend on drums. 'Chaos & Mayhem' was another infectious number, the roaring crescendo possessing everyone in the room, but 'Ich Bin Ein Auslander' probably got the best reception, with its poignant lyrics (especially in this day and age) about racial hatred. And then not forgetting their rendition of The Prodigy's 'Their Law', the original of which featured PWEI on guitar.

Saturday began with the uber noisy Tapewyrm, strongly reminiscent of Maschinenkrieger KR52 Vs. Disraptor from Infest 2011, while Poland's Monica Jeffries injected melody back into proceedings with her hypnotic synth-heavy rock. Hysteresis from Belgium were an interesting occurrence; melodious techno that started off with something like industrial Bollywood.

Grausame Töchter was definitely the highlight of the evening though, even considering headliners Atari Teenage Riot. We knew we were expecting something unusual when a memo appeared on Facebook appealing for willing audience members to get involved in a show that involves 'being spanked'. But we didn't quite expect a full blown fetish exposition. There were two female barely clad backing singers/dancers in Latex masks, and lead singer Aranea Peel came out in a silver sequined gown but soon stripped down to nothing but Latex pants which also, eventually, got removed.

The nudity was nothing though. In the half hour before the show, we saw loads of towels being carefully laid out on the stage and we found out why before long. A naked Aranea Peel made her way to the towelled platform mid-set and emptied her bladder as her dancers continued their choreographed routine either side of her. It made the vicious slapping of volunteer faces seem like child's play. As for the music, they performed a number of tracks from their latest album 'Vagina Dentata'; it was heavy German electro with a punk aesthetic, carnival elements, EBM and BDSM. A full-on feminine freak-out.

Feeling thoroughly overdressed at this point, we stuck around for Velvet Acid Christ who have been one of Infest's most requested bands for the last few years. They are well-known for their creepy sound sampling and heavy lyrical content which turns out to be insanely absorbing live. When the singer wasn't tripping over the microphone cord, the band was performing fan favourites 'Dial8', 'Fun With Drugs' and 'Futile'.

Digital hardcore group Atari Teenage Riot was the main event of the night, their performance wasn't disappointing with their scuzzy renditions of 'Reset', 'Blood In My Eyes' and the sing-song 'Modern Liars'. There was a lot of crowd interaction and the energy of their performance was contagious. In fact, while mosh pits are not a staple of the Infest experience, a relatively polite mini-pit formed for ATR and the rock 'n' roll ended with Alec Empire crowd-surfing.

Johnny Normal drew a small crowd being the first band of Sunday evening, but their riff-laden synthpop was actually an enjoyable way to kick off the final night. They sounded a lot like Gary Numan, particularly on tracks like the infectious 'The London Sound' and 'Don't Blow It'. Trite lyrics admittedly, but it didn't seem to matter. They ended their set with a wholehearted cover of 'Antmusic' by Adam and the Ants.

One of Chile's most important electronic outfits, Vigilante were reminiscent of 90s industrial rock bands Gravity Kills, Stabbing Westward and Cubanate, often with dub themes. They performed several songs from their latest album 'Turning Point', from 'We Are One' to environmental anthem 'Under The Sun'.

German trio RROYCE knew how to get the crowd moving with their brand of dark synthpop, while Displacer was an ambient mix of melancholic synth and frenetic beats, and was accompanied by Leeds guitar veteran Keef Baker.

Aside from the main headliners, Leæther Strip from Denmark was one of the weekend's most anticipated acts. They're a veteran EBM band featuring Claus Larsen - a Viking of a man who incited much frenzy among the crowd during favourites like 'Civil Disobedience' and 'Kiss My Deutschland'. They even performed a fun cover of Soft Cell's 'Sex Dwarf'. However, whether or not they were playing live is another question. The vocals certainly were in the moment, but the synth player barely moved his finger positioning the whole set.

They haven't been around too long having released their self-titled debut album in 2014 via Artoffact Records, but 3TEETH filled the main floor as the weekend's top headliner. Everyone was looking forward to these guys and for a good reason; it was an industrial onslaught. This year they toured with Tool and now have a second album on the way entitled '< shutdown.exe >'. With their distorted vocals and classic industrial aesthetic, they oozed charisma as they performed tracks like 'X Day', 'Nihil' and 'Atrophy' with a refreshing rawness, accompanied by various imagery including a particularly affecting 'terrorist' video montage.

Infest 2016 played host to a full and inspiring selection of artists which is quite a feat for a festival that only has one stage. This is a festival that, though it might seem a cliché to say it, keeps getting better and better every year. We can only imagine what 2017 will bring.