Review of United States Of Horror Album by Ho99o9

Ho99o9 (pronounced 'horror') are a New Jersey experimental hip-hip outfit, who have been one of the ones to look out for in recent years. Across various EP's as well as 2015's 'Dead Bodies in the Lake' mixtape, they've moulded a style that marries hip-hop stylings with punk approach, the way they're rapping, but are often so speedy and sneering and accompanied by punishing, distorted beats. Even live, they're more punk than most punk bands today, with the highest level of madness and energy to their shows, whether they be doing somersaults or attacking you with cereal (seriously). They're here with their debut album 'United States Of Horror' which seals this band's status as one of the best in the game right now. 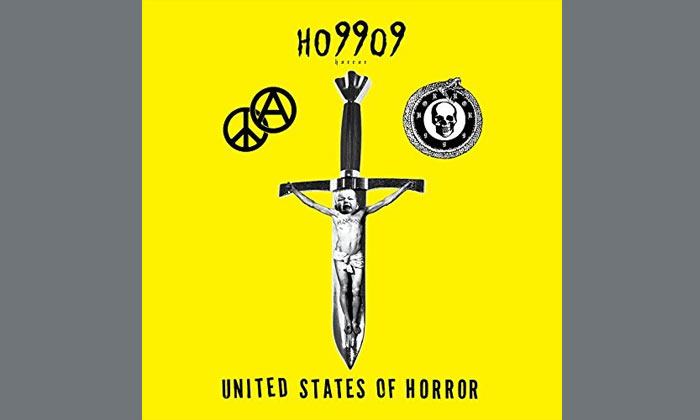 After a quick intro track, 'War Is Hell' kicks things off giving everything you could want in an aggressive hip-hop song. Menacing, burley beat of an industrial nature, tons of bounce in the vocals. The production is just so distorted and the words are spat at you, giving this track the nastiest feel, but there's a ton of groove to keep you locked in.

Speaking of industrial, 'Street Power' feels like Nine Inch Nails in their punkier moments being akin to the turbo guitars of his song 'Wish', but the in-your-face attitude and swerving bars keeps it entirely themselves.

'Face Tatt' has something of a digital hardcore feel to it, with scattering, mechanical shuffling. It's grim and will make you want to go to the dodgiest rave you can find. 'Moneymachine' is more esoteric, with more nuanced, eerie beats, but remains distinctly Ho99o9 with speedy, manic rapping.

We're only 16 minutes into this record, but so much ground has already been covered and we've got so much more yet to explore. As displayed at this point, and as we'll discover some more, Ho99o9 manage to explore more sounds and styles across just a handful of songs on this record, than a lot of artists get across throughout their whole lifespan.

'Splash' has a gangster rap feel to it, with smoky-alleyway-like beats, whilst 'Knuckle Up' has aposse feel to it, with hyper gang vocals going on about how they don't 'take no sh*t' and the swinging, thick beats are gonna make you want to MOSH.

'Sub-Zero' has a 80's DC hardcore vibe to it with snotty vocals and a maladjusted rhythm, whereas 'New Jersey Devil' is metal with some Mike Patton-esque wonky vocals, as well as straight up thick chugging.

'United States Of Horror' is anthemic, with the flashiest beats on the record and defiant statements, about standing up to any kind of oppression, however they're countered against some low, dirty beats to make it fit in with the rest of the record.

The album's closer 'Blaqq Hole' is minimal and sluggish, with mucky, low-key textures just fuzzing around. It's a surprising end to this, record that's pedal-to-the-metal for the most part, but then again by this point you're taught to expect the unexpected with this band.

Listen to War Is Hell:

This is a very impressive record, with tons of energy, attitude and variety. If you're into hip-hop, you're gonna love this. If you're into punk, you're gonna find at least a few tracks here to love. If you like industrial music, minimal music, check this out. But no matter what you're into, you're bound to be exhilarated across the many songs on this record. Ho99o9 have been one of the key hip-hop acts to keep an eye on in recent years, and now, with 'United States Of Horror', they're straight up taking the limelight.