Review of Take Me Home For Christmas Single by Delta Deep

Delta Deep is a “blues-rock-n-soul” band from SoCal (Southern California). The band’s self-titled album dropped a few months ago and the band will begin touring next year (January 2016). Delta Deep is what nowadays is called a “composite” band, i.e. an amalgamation of musicians from other bands. More often than not, composite bands are the result of artists seeking alternative creative outlets. In other words, they want to expand their musical horizons, because being in their other, more famous band locks them into a certain style of music. 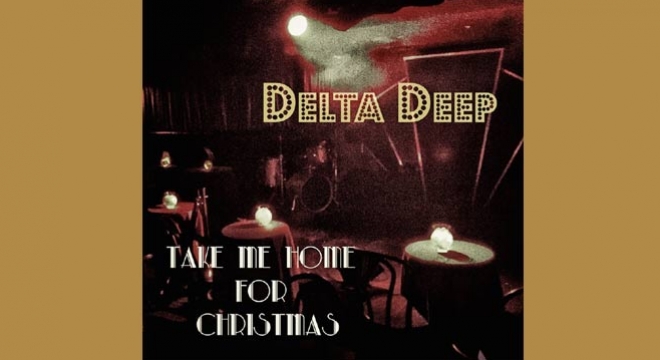 The driving force behind Delta Deep is Phil Collen of Def Leppard, a popular and famous band that definitely has a singular sound. Thus, it’s understandable that he would seek a creative outlet to do something that circumvents the Def Leppard signature sound.

Like almost every other singer and band, Delta Deep decided to release a Christmas single. It’s called ‘Take Me Home for Christmas’, an R&B number with lots of soul and a core sensibility right out of Southern gospel music. It’s a rich, languid song that evokes a religious feeling even though the lyrics avoid any sacred reference.

‘Take Me Home for Christmas’ begins, like many gospel songs, a cappella with the honeyed voice of Debbi Blackwell-Cook, whose pipes were fashioned expressly for gospel/soul. When the rest of the band jumps in, it’s laid back and subdued, not at all what one expects from a hard rocking band. The melody is simple and just right, with the drummer brandishing brushes instead of sticks – a nice touch, especially for a Christmas tune.

The background vocals are less than harmonious, perhaps a little ragged, but they work because they provide a nice contrast to Blackwell-Cook’s thick, syrupy vocals. Lyrically, the song relates a modest human desire: the desire to go home for Christmas, to be with friends and family, to wrap oneself in the warmth of unconditional love. This is a nice change from the usual saccharine inanities of many Christmas songs that warble incessantly about Santa Claus coming to town or wanting “two front teeth” or “all I want for Christmas is you.” Such songs have their place, but Delta Deep gives listeners a more mature theme to identify with, digging to the center of humanity’s psyche.

If the single has a flaw, it’s that it’s too R&B. In other words, the melody doesn’t resemble Christmas traditional Christmas music. If it wasn’t for the lyrics, listeners wouldn’t know it was a Christmas song. That being said, there’s a lot to be said for breaking tradition and doing something new and different.

‘Take Me Home for Christmas’ should appeal to R&B aficionados who are looking for music to spice up the holiday season.