Review of Hearts Album by I Break Horses

As the much-maligned genre of shoegaze currently enjoys its umpteenth resurrection courtesy of the broadsheets and glossies declaring it "The sound of 2011", it's perhaps worth mentioning that the sound inspired by all things 'Loveless' never really went away in the first place. Say what you like about The Horrors but 'Skying's predecessor 'Primary Colours' undoubtedly owed more to that phase than their current (and admittedly excellent) long player, while the growth of labels such as Sonic Cathedral, AC30 and Northern Star has kept the scene alive and kicking in and around London, occasionally breaking free and crossing the great divide also known as Watford Gap services.

That I Break Horses have nothing to do with London or any of the aforementioned imprints is irrelevant. The Stockholm based duo of Maria Linden and Fredrik Balck created their nom de plume by way of a shared love for all things Slowdive, Mary Chain and My Bloody Valentine, whilst never shying away from such influences. Although not the first in recent times to name check what is known in some quarters as the holy trinity of all things feedback and reverb drenched, the fact debut record 'Hearts' took approximately three years and several aborted attempts to make is testament to their dexterity in striving for a kind of unattainable perfection rather than obvious homage to days of yore. 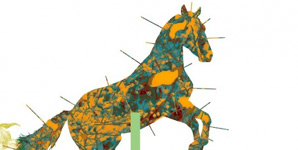 While most of Linden's lyrics remain largely indecipherable here, caught up in the mix of swooning atmospherics and layered psychedelia, there's a feeling that her breathy vocal takes the form of added instrumentation rather than that of traditional chanteuse, not too dissimilar to the likes of Liz Fraser with the Cocteau Twins or to a lesser extent Alison Shaw of Cranes. Opener 'Winter Beats' could be M83 in a parallel universe or even Beach House without the dissonant folkisms that occasionally turn their pastoral observations into dirge-like meanderings.

Title track and lead single 'Hearts' takes a similar route to Death In Vegas' 'Girls', both Linden and Balck's dreamy vocals cooing in effervescent harmony. Not that I Break Horses are one-trick ponies. 'Wired' mixes loud guitars and excitable percussion with a distorted breakdown that's eerily reminiscent of the more punk-orientated sounds of the C86 movement administered by the likes of The Flatmates or The Primitives, while 'Pulse' follows a similar trajectory musically only preferring to let floating keyboards take the lead over incidental shuffling drum patterns.

Sure, there'll be some that will argue others have got there before I Break Horses - School Of Seven Bells and Asobi Seksu being two that spring to mind - and on 'Empty Bottles' the similarities between this and the latter's 'Thursday' are evident, albeit buoyed on by a booming bassline that could have been proffered by any number of stadium rock bands you'd care to mention. Overall though, 'Hearts' is an accomplished body of work that highlights I Break Horses as exquisite purveyors of a genre that despite the criticisms has no intention of disappearing any time soon.