The heavyweight champion of boxing games returns for its fifth round on the PS3, with an all new champion mode and plenty of tweaks and improvements to the usual bevy of features. Fight Night Champion is the slickest and best looking boxing sim currently available and the closest you'll get to feeling like Ali without having to ruin your good looks. 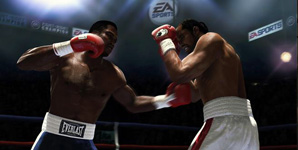 Perhaps the biggest addition this time round is the brand new champion mode. Instead of just being a series of increasingly more challenging bouts strung together to give the illusion of a story, it instead delivers a full narrative, concerning the journey of Andre Bishop from rough-round-the-edges wannabe to heavyweight champ of the world. With a full cast of well acted characters, a great script including every boxing movie cliché there is and slick production values to bring it all together, the story is a compelling rags to riches tale brimming with action that never feels tacked on. Fights flow from the story naturally and include specific story related conditions, such as not punching with a particular hand that's broken or winning a prison brawl by knockout only. These story led twists maintain good variety in the game-play and keep things from getting stale or repetitive, whilst the well written story ensures each fight has a reason behind it. My only gripe with champion mode is that it's over too quickly, lasting as it does, a meagre 4-5 hours.

Also included is the latest edition of legacy mode, a much more traditional sports sim career mode where players can create their own custom fighter from a set of easy to use tools and advance them through progressively harder fights and challenges. Unfortunately, compared to the sublime champion story, legacy feels slow and unremarkable. Without the compelling story to back them up, the fights feel a bit empty and shallow. It's an unusual situation for EA who in making champion mode so good have made every other career mode look worse in comparison. It is more enjoyable however to take your career into the online arena, where you can create your own gym for others to join and compete in tournaments, improving your stats all the while.

The fighting itself feels taut and responsive, the controls have been simplified from previous versions and are now more intuitive. Gone are the complicated multidirectional instructions, replaced instead with simple directional flicks of the analogue stick to unleash the various types of punches. Blocks, dodges and counters feel tighter also, which is just as well as knowing when to strike and when to hold back are key to stamina management and success. Punches look and sound great, with blood and sweat splattering generously, and the obligatory slow motion highlights of particularly devastating blows (Pow! Right on the chin!) are as exciting as they are dramatic. The simplification of the controls allows for much more fluidity in the fights and a much more satisfying and realistic experience as a result.

Judged purely on its improvements (tweaked controls, better animation, create a fighter) it would be easy to dismiss Fight Night Champion as a typical sports sequel where a few minor touch ups are used to justify a new release, and it certainly is true that many features and elements have been refined. However what lifts it up from mere sequel status has to be the riveting new champion mode, a masterful and engaging tale that is unmatched in any sports simulator and alone makes Fight Night Champions worth purchasing. Thankfully the host of other game modes, competitive online multiplayer and selection of historical fighters also add to it to make this the most solid, stylish and satisfying boxing sim currently available. Ding ding.