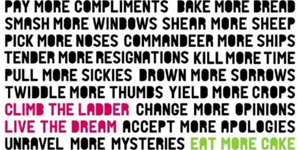 Review of Climb the Ladder, Live the Dream EP by Eat More Cake

Andrew Briggs and Matt Pearn, along with fellow band-mates Owen Charles and Alex Lane, make up Eat More Cake. Delivering a mix of down-tempo electronica, 90's alternative pop-rock and a strangely at home blend of hip-hop beats, their double EP Climb the Ladder, Live the Dream comes with the hope of opening up the Harrow collective to a much wider audience.

The opener on EP 1, 'You'll Be There', has all the elements of an indie-epic: moody guitars and brooding harmonies mixed with the all too familiar piano in the background. There's even the occasional turntable making an appearance that fits in fairly well with the whole arrangement. What does let the song down however - and this bodes well for the rest of the EP - is the vocals. They are just far too weak to resonate with the overall seriousness the song is taking. Again on the trip-hop influenced, "I really want to sound like early Massive Attack" 'Smoke and Mirrors' it is the vocals - and at time the lyricism - that really let the track down. "Thoughts are appearing in your head/ Right now you're probably thinking about what I just said" is but one example of the type of unimpressive bars that makes the listener feel dismissive about the whole track.

On 'The Age of Sin' we are treated to perhaps the most impressive track on the EP, although this may have something to do with the fact that it is an instrumental. Don't see that as a put down though, as it genuinely is a great track, mixing some maestro guitar with the typical trip-hop backbeat. At times it is reminiscent of some mid-career Beta Band, whilst at other times it does sound like an all-round original venture. 'Forever Dreaming', the last track on EP1, at last finds the missing link between the pathos ridden harmony and the disappointing vocals, by employing the use of a female vocalist - maybe something they should do again in the future.

On to EP2 then: this immediately kicks off with the industrial sounding 'Glass Houses.' What is interesting about this, however, is that in spite of moaning about the vocals on the first EP, they sound much more at home supporting this guitar driven sound. It is almost more Nu-Metal than Trip-Hop and I don't mean that in a bad way. Think SOAD slowed down and with new vocals implanted onto the song. This EP is much more angry than the first, both musically and lyrically; many of the lyrics deal with the subject of "I'm sick of the state of the world", tackling the ills of consumerism and capitalism (again SOAD). This does come to a nice close however with the cheekily titled 'Matt's Ibiza Tune,' which ends the album with an easy-on-the-ears Balearic comedown.

As a double EP, there is a wealth of contrast that sounds good on the whole. Yes, the vocals sound out of place for the majority of the time but rather than dwell on the negatives, I feel I should concentrate more on the upsides. Specifically, the trip-hop elements found throughout and how well they incorporate the use of hip-hop beats in what would normally be foreign territory. There is definitely room for improvement but that is a given when you listen to a debut EP. The band are still trying to find their feet and will surely find them soon enough.