Despite existing for over a decade now, LA based six-piece Dengue Fever are something of an unknown quantity to many outside of their home neighbourhood. It's also fair to say they're possibly one of the most unique ensembles to emerge from the Californian underground scene ever, fusing traditional influences such as folk and sun-kissed psychedelia with Cambodian pop music and Khmer rhythms.

Initially formed in 2001, their first two long players 'Dengue Fever' and 'Escape From Dragon House' both featured covers from some of Cambodia's most revered contemporary artists while even the original compositions found themselves translated into the Cambodian Khmer dialect. As the brainchild of brothers Zac and Ethan Holtzman, Dengue Fever's first real breakthrough in terms of widespread recognition came courtesy of 2008's 'Venus Earth', their third album and first to feature entirely English lyrics. Its release on Peter Gabriel's Real World imprint not only earned them a bite at commercial success, but also highlighted the distinctive vocal talents of Chhom Nimol - the only Cambodian member in the band - as a considerable force in their own right. 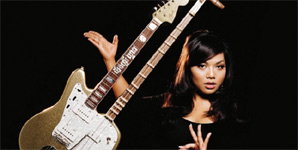 With such a melting pot of styles, ideas, and sounds, it's perhaps inevitable that 'Cannibal Courtship', their fourth and most eagerly awaited release to date finds itself in the quite enviable position of being virtually impossible to define and ultimately categorise by genre. Instead, across the eleven songs of which its comprised, 'Cannibal Courtship' takes a progressive journey via late 1960s lounge cafes, new wave inspired surf pop, semi-acoustic folk meanderings and even the odd excursion into dreamlike territories occupied by the likes of The Cure.

Where the laidback groove of the opening title track has Nimol cooing "Be my sacrificial lamb" in the most innocently demure way possible, the more vociferous 'Cement Slippers' and echo laden pizzazz of 'Durian Dowry' conjure up images of first album B-52s and 1970s American cop show themes respectively. Delve deeper into 'Cannibal Courtship''s exotic melange and there's devilish calypso ('Only A Friend'), harmonious West Coast pop a la Jefferson Airplane ('2012 (Bury Our Heads)') and introspective electro with an Eastern twist ('Thank You Goodbye').

While each piece of music takes its own turn for the unexpected, a feat Dengue Fever should be applauded for rather than taking a more conventional route, there is an element of disorientation about 'Cannibal Courtship' that makes it heavy going for the first half-dozen or so listens. However, perseverance is the name of the game here, and although the mid-tempo likes of 'Uku' and 'Sister In The Radio' underwhelm compared to what's gone before and immediately follows suit, 'Cannibal Courtship' and its creators possess an endearing quality that perhaps makes more sense on a stage in a sweaty club.

Nevertheless, this is a worthy document from a band whose eclectic star looks set to shine even brighter during the coming months. Promising.