Review of The Lesser EP by Decibels

Originally focused on remixing tracks, Decibels have taken the leap into being a fully-fledged recording group with the release of the single The Lesser. The bleeps and sequences they have mixed together are already creating waves in the music scene having already appeared on BBC Radio One and a host of local BBC Introducing shows. 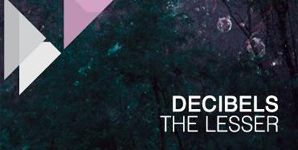 From the opening MIDI taps, the angelic synths and front-man Stuart Bruce's harmonious vocals, 'The Lesser' fuses a mixture ambient and heavy electro and garage rock guitars to create a track that has the listen on edge almost throughout, pondering which direction it will be facing by the end of it all. The self-deprecating lyrics "I in short supply of friends that I can call mine," sang so gracefully by Bruce, combine fittingly with the 80s synth opening. When the guitars and much heavier synth-lines are introduced under the harmonies, the key shift does nothing to deride the listener from the initial pleasantries.

B-Side Turn From the Light has a similar ethereal synthy introduction, before heading into something much else altogether. Whilst this one is void of any distinctive guitar use, it still evokes the same passion and DIY ethos found in 'The Lesser.'

Already feeling the love from indie circle and with the group supposedly linking up with the hip-hop community, the group will no doubt continue making waves for some time.