If you can't make head nor tail of a band's name then chances are you'll find their sound every bit as baffling. Box Codax have certainly stuck to this theory for their album 'Hellabuster' but instead of the confusion stemming from delighted intrigue, here it is merely a result of unsubstantiated folly. 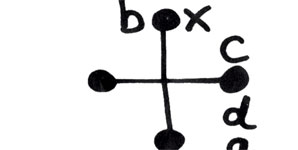 Upon hearing that one-third of Box Codax is Nick McCarthy from Franz Ferdinand, there was hope that this album would reflect and live up to his more-famous band's sound. However, the only thing eerily similar are McCarthy's vocals which often resemble those of Alex Kapranos' lazy drawl. 'Hellabuster' is interestingly based around the theme of a peculiar young lad named as such, and in turn their vocal and instrumental arrangements, whether consciously or not, reflect this unconventionality. The opening title track starts with a promising jingly piano arrangement, yet quickly descends into calamity once the vocals swoop in. It's not that McCarthy or singing partner-in-crime here Alex Ragnew cannot hold a tune at all, it's simply that they are out of time not only with each other but also with the supporting music. Their voices are both so dominant that you're not sure which one to focus on and as a result, a sense of chaos reigns from the off. Unfortunately, this is something that does not seem to improve as the record progresses, even when the lighter vocals of Manuela Gernedel (aka McCarthy's wife) are introduced.

Kudos to the trio for their efforts with the instrumentals, however unsuccessful they may ultimately be in pulling them off. Along with the usual guitar and piano arrangements, we also hear samba beats, synths, violins and whistles, all muddled together into some extraordinary time signatures. Experimentation in the current climate where many bands are happy to rest on their laurels is commendable, but behind most artists' unfamiliar structures you'll find there is secretly a method to the madness. However hard you listen here though, a large proportion of it just seems to be madness.

There are some good ideas in 'Hellabuster' but they seem to have become rather misguided between the time when the band first put pen to paper and then finally made it into a recording studio. It's almost as if they have been too ambitious and as a result have overwhelmed themselves with ideas they are unable to control; so what is left is an unintelligible muddle. With a bit of thought to the structure and some modulation to the vocals they might actually be on to something more listenable whilst retaining their unique qualities. At the end of the day, Box Codax sound like they're having fun and many would argue that's all that matters. Just don't expect to obtain as much enjoyment out of the recording in return.