Brighton-based band Blood Red Shoes have been in the circuit for some time. Already having released two albums, and toured over 12 countries, their real breakthrough was in 2008 with their debut album Box of Secrets. 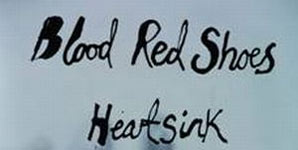 The third single off their sophomore effort, Fire Like This, is a catchy throwback to Blur and Pixies; both of which have been named influences by the band themselves. 'Heartsink' combines an early 90s grunge sound with a thumping electronic beat, alluding them with other recent successful Indie bands such as The Wombats and The Killers.

Whilst it takes a few listens to truly appreciate its sound, a catchy chorus means that you can't avoid having it in your head for hours after. Without you noticing it, you will have, as their lyrics suggest, 'heard it all ten thousand times'. The only problem that hinders this single is a lack of originality. It's hardly anything new on the indie-alternative scene and it may fade away behind those acts who are dominating the airways at the moment. The lyrics, whilst very easy to sing along to (which undoubtedly will go down well in indie clubs across the country), also seem to lack inspiration and creativity.

Without a doubt, this song will propel Blood red Shoes into further success, and for those who have never heard of them before, considering they are attempting to break the US in October, it is a great introduction to what this band exactly stands for. But whether it holds as evidence of the band's staying power or not; that is yet to be proved.

Blood Red Shoes - Light It Up

Blood Red Shoes - It's Getting Boring By The Sea