By Holly Williams in Lifestyle / Showbiz on 08 January 2014

Honey Boo Boo has been left with a headache after a car accident that left her family shaken.

Honey Boo Boo and her family have narrowly escaped serious harm after getting involved in car accident on Monday (January 6th 2014) in Milledgeville, Georgia.

The 'Here Comes Honey Boo Boo' reality stars; including Honey Boo Boo herself, her mother Mama June, her sisters Pumpkin and Jessica and her father Sugar Bear; were nearly all injured after a speeding truck with no lights on crashed into their Chevrolet Suburban as Sugar Bear went to turn left at a traffic light according to TMZ.

8-year-old Boo Boo (real name Alana Thompson) is reportedly suffering from a headache after banging her head on the window, while her father has a bruised back, her mother has a sprained neck and back and her sister Pumpkin has bruises on her chest and is having panic attacks. TMZ did not report that Jessica suffered any damage and neither of the other two sisters, Anna and Kaitlyn, were in the vehicle at the time.

By Jaclyn Brandt in Lifestyle / Showbiz on 07 January 2014

While filming their new season, the family from Here Comes Honey Boo Boo were involved in a serious crash in Georgia.

The family who became famous on the TLC reality show Here Comes Honey Boo Boo were involved in a car crash, but it looks like they are all okay. 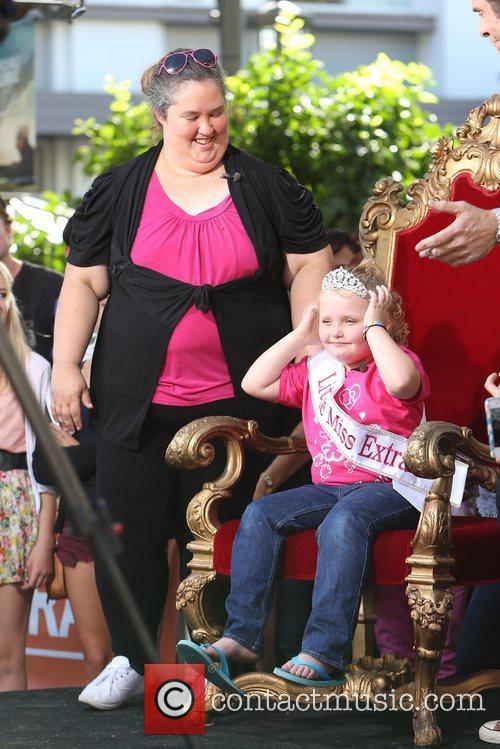 Honey Boo Boo, or Alana Thompson, along with her mom, Mama June

Mama June Shannon, the matriarch of the family, said the crash happened Monday night in Georgia.

Honey Boo Boo is returning to screens in July!

Is this good news or bad news? We're not sure. Honey Boo Boo is returning on July 17, 2013 - she's back, and more terrifying than ever. The 7-year-old television star returns with a new episode on TLC this summer, though it may not all be about the beauty pageant kid this time.

According to the Los Angeles Times, it's possible that Honey Boo Boo's mama will marry her long-time beau Sugar Bear in the latest instalment. In fact, the couple married in a May 5 ceremony, with Us Weekly running photographs of the newlyweds wearing camouflage and driving off into the distance in a yellow ATV with cans tied to the bag. It is believed that the nuptials were filmed, probably for the July episode.

Here Comes Honey Boo Boo is one of TLC's biggest shows, averaging 2.3 million viewers last fall. It puts it on par with the channel's other big-hitters like Sister Wives, Breaking Amish and Long Island Medium. However, June 'Mama' Shannon and Alana 'Boo Boo' Thompson have become targets across the media, while the family were parodied on South Park. The show has also drawn unexpected praise, particularly for Alana's endorsement of her gay uncle Lee. In a piece for the Los Angeles Times last August, writer Ada Calhoun called the "ritual stoning" of the family "a little ludicrous."

Mama June and Sugar Bear's wedding should make for some excellent television material.

There’s finally a Honey Boo Boo wedding on the way, as the tiny beauty queen’s parents – June Shannon and Mike “Sugar Bear” Thompson are getting married. The unusual couple met nine years ago in an online chatroom and got together soon afterwards, according th The Daily Mail. Alana or Honey Boo Boo, as viewers of the show know her was born two years later.

It’s been confirmed that the wedding will definitely be filmed and broadcast on the family’s reality show Here Comes Honey Boo Boo. The show itself came about after Honey Boo Boo and her… eccentric mother gained enormous popularity, when they appeared on the TLC show toddlers and tiaras. Seeing the pageant mom and daughter’s success with audiences, TLC created the Here Comes Honey Boo Boo series, which is currently filming its second season.

Meanwhile, Honey Boo Boo still competes in pageants and she recently returned home from New York where she picked up yet another crown – that of Miss Trump Hotel New York 2013. Seeing as how Donald Trump is the owner of the Miss Universe pageant, maybe this title will give Alana an edge, should she ever compete for the ultimate crown. If success continues to stick to her and her family like it has so far though, she definitely won’t have to. 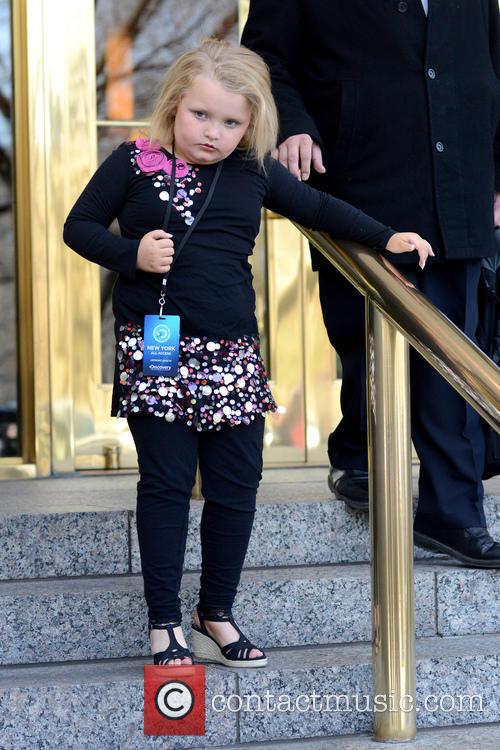 News just in: Christmas isn’t officially over. Oh no. Not until we’ve all watched the Honey Boo Boo Christmas Special, which airs on Sunday night (February 10, 2013) at 8pm. Not only do we get to see the new lightweight Mama June (well, she’s lost 100lbs already – perhaps ‘lightweight’ is pushing it a bit) but we also get to see the Thompson family decorating their artificial Christmas tree, as only the Thompson’s know how.

After a lot of wrangling with white spiky branches and a cringe-worthy exchange of double-entendres between Sugar Bear and Mama June (in front of the children no less!), the tree was eventually erected (and no, that wasn’t actually one of the double entendres – that’s actually a bit more highbrow that what you’ll get to see on screen) but when they couldn’t find the tree topper, Alana, aka Honey Boo Boo had a novel idea of what they should they should put on top of the tree instead: a live farm animal (we won’t completely spoil it for you by telling you which type of animal it was). Needless to say, the end result was something of a catastrophe, leading Honey Boo Boo to remark “this is a family secret,” for fear that Sugar Bear might find out and punish them.

According to TMZ, Mama June says she lost 100lbs since the series began, but mainly due to her hectic TV schedule. “They have me running around and going different places ... I guess it's paying off,” she explained.

According to TMZ.com, Tony was arrested in November 2012 for a dangerous prank in which he dressed as a giant gorilla and scared people on the side of a freeway. It was a stunt that Honey Boo Boo matriarch Mama June was none too pleased about. In fact, she's no longer comfortable with Tony appearing on the show, saying, "We love him as a friend ... but that was a crazy story..Not trying to be mean, but we want to keep it family oriented." Honey's mother also made it clear that while Tony goes by the name of "cousin" on the show, he's not actually related to the family. She added, "Crazy Tony's just a family friend... who is just crazy." Did anyone mention that he's crazy, too? A representative for Tony says he's disappointed by the news, adding, "TV's changed that family."

Last week, it was reported that Mama June is dumping all the earnings from the TLC reality show into five separate trust funds for her children and grandchildren. The family reportedly earn between $15,000 and $20,000 per episode.

Heidi Montag and Spencer Pratt are prime examples of reality TV subjects gone wrong. Heidi ended up developing an addiction to plastic surgery and blew a load of their money on that, plus reports a while back said that Spencer spent a ton of dough on crystal. Not the drug, no, literal crystals. Shiny stones. Anyway, there's one reality TV family who is treating their money right: the Here Comes Honey Boo Boo family.

According to TMZ Mama June, Honey Boo Boo's mom, has been stashing away their earnings in trust funds for her four daughters- star of the show Alana aged 7, and her sisters Lauren aged 12, Jessica aged 15 and Anna aged 18, plus another fund for June's granddaughter Kaitlyn.

"TLC [the company that pays us] puts the money into the girls' trust accounts for me and then I get an email telling me how much everyone gets,' she explained. "You're never gonna see me drive a Range Rover or a Mercedes. I'll drive one if someone else pays for it. Never gonna live above my means."

'Buckwild' is an American reality TV show that has been described as the meeting of Honey Boo-Boo Child and Jersey Shore, and has been greatly criticised by West Virginia Senator, Joe Manchin, because it panders to "ugly, inaccurate stereotypes" of his home state.

Buckwild follows a group of West Virginia teens who "share a deep pride in contemporary small-town American life and a passion for living it to the fullest, while making up their own rules as they go," a press release said. Before it's production even started the show came under criticism and a PhD candidate, Jinny Turman-Deal, reported by The DA said: "Honestly, I think people have a reason to be concerned. The characters of these shows are usually the most eccentric and don't represent the whole population. I know a lot of people from New Jersey who resent 'Jersey Shore,'" she said. "But, hopefully there's something deeper to this show, and it doesn't simply reinforce a stereotype."

The Senator himself said "As a proud West Virginian, I am writing to formally request that you put a stop to the travesty called 'Buckwild'... Instead of showcasing the beauty of our people and our state, you preyed on young people, coaxed them into displaying shameful behavior -- and now you are profiting from it. That is just wrong." Adding, "I hope that as you consider your decision, that you would consider your own state, your own community and your own children. Would you try to portray them in this light?"