Review of Dream Service Album by The Bottletop Band

Supergroups tend to be a contentious issue in music as they can go one of two ways; they can either be a storm of egos and pretentiousness or they can be a musical journey brought on by a shared desire to jam and 'do something different'. Just a look at the band members of The Bottletop Band and the musical clout attached to them makes you suspect that they're going to be the former. Its alumni includes some of this country's finest indie darlings (Gruff Rhys, Matt Helders, Carl Barat, Tim Burgess) all joining forces with a group of Brazilian musicians in the name of raising awareness with the hope of raising funds for the Bottletop Foundation. 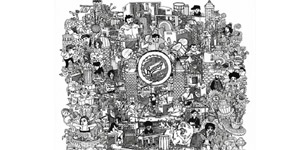 What sticks out on "Dream Service" is the altruistic nature of the music. Despite the musical heavyweights within the group and tied to the project, there isn't an overbearing reliance on one person's sound nor does it seem like a battleground for the member's egos. For example, the opening track "Voices" with VV Brown and "You'll Get Nothing" with Fink sound like two perfectly acceptable songs that you wouldn't necessarily expect to hear from the same artist, never mind on the same album. But it's this incredibly diverse nature that makes this album so enjoyable as you're never quite sure what the next song is going to sound like. The only real connector between this album of diverse songs is the overwhelming sense of positivity and optimism that simply radiates on each song.

The combination of British lyricists/singers and Brazilian musicians works surprisingly well, creating a deliciously tropical sound with high standard lyrics to boot. The sonic explosion that is Gruff Rhys' "Dream Service" by all rights shouldn't work (think the musical equivalent of Chilli and Ice Cream), but the combination of overlooped vocals and gloriously repetitive percussion create an interesting Samba take on Can-esque Krautrock.

"A Message", features a stunning combination of Spanish Guitar and thought provoking lyricism from one of this country's more intelligent rappers in Yungun, provides the album with a truly enriching book-ender. It reminds the listener without preaching that this album is more than just a collection of good/great songs; this is a charity album promoting the ideal of a better tomorrow for others out there that are less fortunate. If only all charity records were this enjoyably whimsical and giving.

(If further encouragement was needed, if you purchase this album on its pledgemusic page, you can get one of many exclusive incentives such as a Gruff Rhys signed bobble hat or a t-shirt signed by all the members of the band AND Paris Hilton, apparently).