Review of Stay Home Album by The Beets

New York trio The Beets are a curious anomaly. Despite having formed in 2008, their sound has more in common with bands from four decades ago whose most productive times were spent in garage rehearsal spaces and documented by the likes of Pebbles and Nuggets twenty years later. Fortunately, as with 'Stay Home''s 2009 predecessor 'Spit In The Face Of People Who Don't Want To Be Cool', there's enough here to pacify even the most vocally opposed harbingers of all things retro. 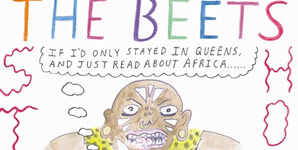 While there's little chance of The Beets embracing technology or electronica any time soon, their warts an' all lo-fi take on the most primitive aspects of rock and roll have a quaintly appetising character about them. At times, reminiscent of a younger less world weary Black Lips, the combination of guitarist Juan Wauters and bass player Jose Garcia's incessantly drawled harmonies harks back to a time when one could imagine Mick Jagger and Brian Jones wrestling for control of the Rolling Stones both in and out of the studio. Sometimes the tendency to strip things bare to an almost unacceptable level of nudity reduces 'Stay Home''s impact, but the positives here far outweigh any of the record's shortcomings.

If 'Cold Lips' is Cole Alexander and co. taking the embryonic Beatles for an amphetamine-induced ride along Hamburg's Reeperbahn, then 'Pops 'n' Me' is possibly how the Mary Chain would have ended up had they spent their teenage years devouring Howling Wolf and John Lee Hooker as opposed to Bo Diddley. The guttural 'Dead' and softly softly approach favoured by 'Floating' plays The Strange Boys at their own game and beats them hands down, while 'Hens And Roosters' winsome delivery gives the impression it could dissipate and fall apart at any moment.

There's no wheel re-invention taking place here and one suspects The Beets wouldn't have it any other way. Epitomised by the alcohol soaked back-to-basics r'n'b of 'Your Name Is On My Bones', 'Stay Home' is possibly the most genuinely constructed, agenda free rock and roll record you're likely to hear all here, and as recommendations go, it doesn't get much better than that.