Team Me - Team Me EP Review

Review of Team Me EP by Team Me

Team Me started life several years ago as a solo project for Marius D. Hagen, but has since evolved into a fully-fledged Norwegian pop-outfit. Currently in the midst of writing and recording their debut album due out in the autumn, this seven-piece have, in the meantime, released the simply titled 'EP' EP to whet our appetites in preparation. 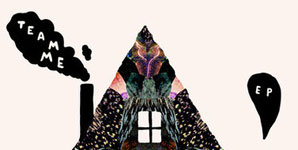 Presented here are five tracks of unadulterated indie-pop, unrelenting in their vigour and passion from the beginning. The tracks, although 'Come Down' especially, have a definite Arcade Fire feel about them, with grand orchestral instrumentals supporting lighter, jingly hooks. Even the vocals share stark similarities, as poetic choral chants lead into heady, intoxicating melodies that carry you along in their surge of urgency. Yet all the while Team Me retains a distinctly ethereal, Norwegian resonance which grants the record a sense of uniqueness. The slightly higher-pitched, effervescent tone to Hagen's voice is noticeably different to that of many angst-driven British and American peers, instead resembling Jonas Bjerre from Scandinavian contemporaries Mew or Ben Gibbard of Death Cab for Cutie.

Little quirks in the openings to several of their tracks also grab your attention and provide an element of vivacity away from the more dramatic violin chords and slow, hypnotic drum beats. 'Dear Sister' starts with a dash of an accordion, transporting us momentarily to the depths of France; whilst 'Weathervanes and Chemicals' possesses a distinctly Irish-folk feel about it before it swiftly morphs into the more mainstream sound that dominates the remainder. Not everything here is buoyant however, with tracks 'Kennedy Street' and 'Me and the Mountain' demonstrating that this septet are able to tackle more solemn tones just as successfully. 'Me and the Mountain' in particular reflects these slightly more sombre and tranquil components with lullaby-esque verses and soft, harmonious vocals lulling you into a soothed state before jerking you back to your senses with a rhapsodic chorus.

'EP' has all the elements to demonstrate the making of a great band, with subtle yet penetrating melodies, memorable vocals and catchy hooks. Team Me's upcoming debut will be eagerly anticipated, but only time will tell if they shall enjoy even vaguely comparable levels of success that their similar-sounding contemporaries have done. 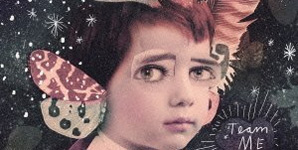 Team Me - To The Treetops 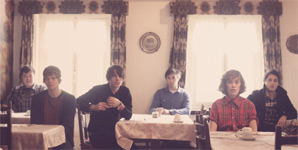 Team Me - Team Me