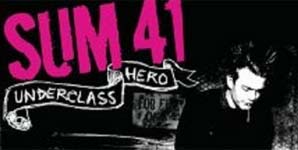 Having sold over 7 million records since breaking through with 2001's 'All Killer No Filler', Canadians Sum 41 have cemented their position as a world-renowned punk-rock outfit, but have recently gone through a number of changes. Guitarist Dave Baksh quit, leaving them as a trio and they also parted ways with their management company. They now release their forth full-length album, which was produced by front man Deryck Whibley.

Opening and title track 'Underclass Hero' suggests that the band hasn't been affected too much by the aforementioned changes - to the point that the formulaic punk riff and tempo make it sound uncannily like previous hit 'Fat Lip'. Of the same ilk is 'No Apologies', while the sombre intro to 'Speak Of The Devil' is thankfully lifted by a dynamic and tempo change very much in keeping with the genre. Displaying their fondness for a heavier sound, the band merges punk and metal on 'King Of Contradiction', with results that are decent but not exhilarating.

Comparisons to Green Day's 'American Idiot' album have already been made with this release and not unduly so. Most obvious on 'March Of The Dogs', political themes are a regular rant of Whibley to the backing of thrashing guitars. 'Walking Disaster' is like a less epic 'Jesus Of Suburbia', with different sounds characterising the segments of the track that at times resembles the sound of Blink 182. They don't pull it off with the same aplomb as the elder statesmen of punk though, but they do fair better in other trials. Admirably in its honesty, 'Dear Father' deals with the issue of a missing dad. Musically calmer, it allows the band to be arguably more emotive than previously possible and the same can be said of the acoustic-led 'With Me'. Sticking to the power-ballad recipe, it has a big chorus and a rhythm section that kicks in at the second verse. Obviously about a 'special person', it might be slightly soppy, but Sum 41 just about pull it off. It is the highlight of an album that sees them trying to develop musically, though with mixed results. 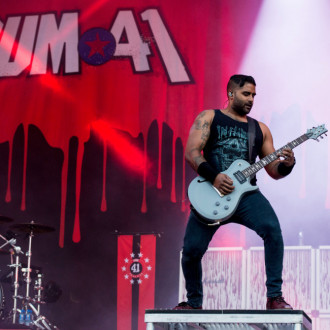