Review of From Africa With Fury: Rise Album by Seun Kuti

Seun Anikulapo Kuti is the youngest son of the legendary afrobeat pioneer Fela Kuti. The currently very popular and distinctive sound of afrobeat, that fuses funk, Latin and African beats together, is totally relevant to our modern world culture. Egypt 80 was the charismatic and brilliant band that was behind Fela himself. The mantle it seems has been passed to the youngest Kuti, Seun. 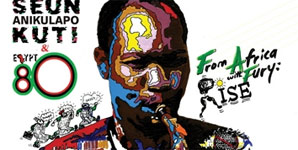 It surely must be an honour to follow in the footsteps of such an enigmatic, creative and political man such as Fela Kuti. With other family members also with music careers it's certainly a big role to fill. Certainly Seun's musicianship with the fantastic Egypt 80 delivers in almost exactly the same way as the original creator himself. The album title 'From Africa With Fury: Rise' shows all the hallmarks of revolutionary spirit that was the source of afrobeat and the conscious 'black power freedom of Africa' the rhetoric.

If you've never listened to afrobeat you could like this and learn something. For those that know afrobeat you may not be learning anything new. Certainly the musicianship is excellent but following in someone's footsteps without any difference of style could be seen as more nostalgic than revolutionary. However the spirit of the Kuti's live on and who better to carry on than the youngest son. Indeed the sound was ahead of its time and is truly an illuminating and positive sound. The fiery Kuti spirit is hard to deny. The lyrics in 'Rise' give you the feeling of soul and confrontation. Indeed the infectious sound of afrobeat is hard not to like, for me anyway! 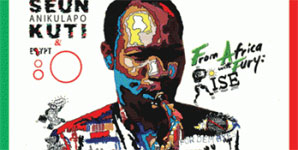