With the World Cup on the horizon, EA Sports have released the third variation of their World Cup football simulator in order to whet your appetite for the real thing. The latest FIFA offering boasts detailed rosters of every World Cup team to be included in qualifying as well as the final tournament, the majority of which bear a striking resemblance to their real world equivalent. Though surprisingly Theo Walcott missed the cut, unfortunately Peter Crouch didn't….. 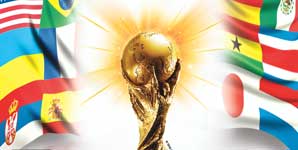 Dive straight into the game and you will be faced with a raft of options. Firstly there is the title game, the FIFA World Cup in which you can start with your favourite team in the World Cup finals or endeavour to take them to glory from the start of qualifying. Either take the actual travelled route from any world cup qualification region or randomise and create your own path to glory. Other options aside include penalty shoot-out practice (probably for all us English) and the global challenges. These challenges represent turning around matches from yesteryear, for instance you will be playing as England who are one-nil down against Germany in the last ever game at Wembley, with the brief to turn the game around with half an hour to play. The concept is excellent but the delivery leaves much to be desired and hints at deadlines being too tight for the developers to play this one out in full. You see, although you are playing games from yesteryear, the players are current and not the ones who took part at the time. This completely negates authenticity and the emotional experience of the time, ignores the fact that the different sets of players will have had differing attributes and tells you that this feature just did not have the time to be developed properly. As a result it seems a bit pointless.

Into the game-play and nothing much has changed from FIFA 2006. The game itself feels slightly quicker, spectacular goals are still pretty frequent and you don't feel that you have worked hard enough for them and the first touch of the your players feels a bit more reactive to what you are actually doing with the pad. On top of this, one touch passes are more responsive but sometimes it still feels like the aim of your shots it's a bit too random and not heading for the area that you are aiming. Goalkeeper movements have been developed however, now on top of the kamikaze dash from the goal-line, during penalty kicks you can now move along the goal-line, jump, crouch (sorry, literally crouch down rather than Peter) or invoke Grobbelaar's spaghetti legs.

As usual FIFA looks very well, from excellent crowd scenes and modelled actual stadiums to player likeness and celebrations, FIFA excels as usual. You even get the global zoom into the stadium that you are playing in that occurs on Match of the Day. The EA soundtrack is top notch as its track record suggests and the commentary is adequate. But if I hear Andy Townsend wondering if the current crop of England players can emulate the boys from '66 again I am going to hunt him down and hit him repeatedly with his microphone until 1966 falls from his memory.

There is nothing major new with the latest version of FIFA. It is still essentially based on speed and flair and offers aesthetics over game-play. Having said that if you looking for a title to get you in the mood for Germany then this is it.