Electronic Arts release yet another flavour of their much flaunted FIFA football incarnation, this time based on the UEFA Champions League. 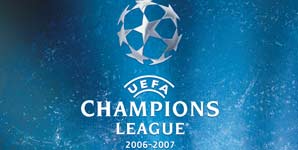 Boot the game up and you find yourself having to suppress a smile. Up roars the UEFA Champions League anthem and memories of Champions League battles flood through your mind and you have an uncanny urge to buy another Playstation. probably using your Mastercard. whilst drinking an Amstel. funny that.

As with all bastardisations of EA's flagship football title, you have licensed teams, players and kits from every corner of the globe. The usual options present themselves to you on the main menu screen with one new addition. As per usual you have an exhibition mode and the option of the usual season mode, but with this being a Champions League title; we have the 'Treble' mode. Can you guide your team from any of the top European leagues to Cup, League Title & Champions League glory all in one season? Humourously enough, you can even attempt this with Sheffield United.

The 'Treble' is a manager-cum-player challenge where you have windows to buy and sell players whilst facing various challenges throughout the season which you have to overcome. This is a novel idea, but is not without its drawbacks. Firstly, the computer decides whether you get the chance to play the whole game or whether you join the action after a certain period of time. This presents the challenges that you have to overcome, such as you joining the action 2-0 down away to Watford and being expected to come up with a result. 'Easy' I hear you cry! Well what about if it is away at Galatasary in the Champions League? This is not a problem in itself, more a positive, but your virtual chairman is right whip cracker. Even if you achieve 99% of your tasks, you are likely to face the sack - its treble or bust. This is a right pain because, unless you have saved your progress over and over again, you will be back to square one. Come on, how many teams do the treble? Is it likely that the Wigan manager is going to get the bullet for not bringing home the treble? Secondly, every new game is exactly the same, aside from your choice of team. Same scenarios, same challenges - where's the variety to provide longevity?

In terms of the gameplay, it's pretty much identical to previous FIFA incarnations. Same game engine, same flaws. Passing the ball is too easy, control of the ball is too easy, tackling is strangely difficult, the ball physics are still not quite right, and so on. The graphics look well as with most FIFA football titles, but I think that EA have reached the extent of what they can achieve with the PS2.

If you have previous FIFA titles, it is questionable what this version will add to your stock, unless of course you LOVE the Champion League! It is pretty much a title that guarantees revenue with minimal development time, a ploy that we are seeing more and more from the developers just before the next generation war hots up and a tactic that not just EA are guilty of.