So, what better way to burn off the "Winter Warming" (or "fat" to those of you who can be honest with yourself) than with a thorough interactive workout which also boasts that it will not only get you fit, but also teach you Kung Fu variant known as Hung Gar? Hung Gar promises a variety of moves, stances and exercises that will increase not only your physical well being, but your mental state of mind also. All of this for the price of a PS2 game, there must be a catch. 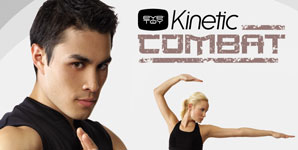 There are main flaws in the plan and I'll start with the first. You have to fit the entirety of your body on the screen and encapsulated by the camera. Yes, the title comes with a lens that fits over your Eyetoy and increases its field of vision but it is still mightily difficult to fit the entirety of your frame on to the frame. (Having just read that back I have assumed that you will be cynical and a believe me to be a fat b*st*rd. This is only a half truth, I am not that fat.) This issue, coupled with the dilemmas that the further you are from the camera the less likely it is to pick up your movements and that any lack of light in the room enhances the issue, causes problems to say the least.

Assuming that you have got this right and you are happy with your set up, the game itself has five main arenas. The Dragon zone acts as an introduction and warm up area, whilst the Tiger zone maintains a focus on strength and endurance. The Mantis zone focuses on agility; the Phoenix zone combines the three zones before it and the final zone acts as a stand alone area where a pixellated Oriental Hung Gar guru teaches you breathing techniques and peace of mind. The first four zones are set up in similar fashions but concentrate on different areas. Each section has a warm up, a move tutorial, a sparring programme, mini-games and a best of three "beat the boss" that asks you to use the moves that you have learnt in each zone to beat a boss like creature that embodies the animal of which the zone is named in combat. (It was really satisfying to beat that stupid Mantis. stupid, evil, green, cocky b*st*rd. however long it took me.)

The title itself expects you to work your way through the game over a 4 month period in order to achieve increased fitness, metal well being and a grounding in Hung Gar Kung-Fu. This brings me nicely to my second flaw, the game assumes that you aren't lazy. As with most things in life, this will not only yield whatever you are prepared to put into it, you will not tale the eternally patient virtual trainer anywhere near as seriously as a real life one. This will generally mean that you will not push yourself as hard physically or a technically as you need to in order to improve your Hung Gar technique to a black belt standard (or whatever the Hung Gar's use to measure success).

Quite simply, if you are looking to an alternative to exercise outdoors exercise or exercise videos with retarded z list celebrities AND you have the motivation and mental discipline to push yourself then this title would be very effective. Hell, I did one warm up and had muscles that I didn't know I had aching the next day. Unfortunately I have no motivation or mental discipline so the chances of me getting anything out of it are slim.