Cricket titles have probably been the least successful sports genre that has made an entertaining transition to the world of computer games. In recent years EA have competed against Codemasters' Brian Lara series to get the transition right but both have had successes and failures, sometimes in similar areas, sometimes in differing ways. Specifically in a one player scenario, it is difficult to recreate the mind games with current artificial intelligence that occur on the cricket field between bowler and batsman that can mean the fine line between winning losing. It may be bringing a batsman out of his crease with successive shorter balls and manoeuvring him into the area you want him before you strike or mind games and sledging, but this is definitely the main reason why it is difficult to bring the game of cricket to this form of multimedia entertainment. 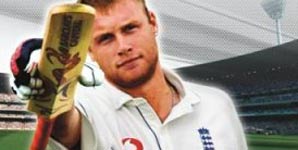 Cricket '07, as with all EA sports titles, is a veritable feast of up to date statistics. From letting you play county matches in the UK & Australia with true to life squads, to competing in real life competitions from the County Championship, Twenty20 Cup and the C&G Trophy to full international tours, The Ashes or The World Cup. New in this area in the 2007 version are equipment illustrated by the more famous cricket goods manufacturers of Gunn & Moore, Gray-Nicolls & Kookaburra to name a selection.

On to the action. The bowling is pretty standard with you selecting your shot type before your run-up, the placement of your shot during your run-up (this will be effected to some degree of error by how could your bowler is deemed to be) and the speed of the delivery is selected towards the end of your run-up by stop a power meter on a 100% power gauge. In referring to my opening gambit, this is generally the area that falls down with cricket computer games. Don't get me wrong, the bowling action and mechanics are very slick and work extremely well. You won't bowl the perfect ball every time as it is down to the timing of two r three selections as you ball and this is true to real life. The main problem is not being able to `tempt' the batsmen into wayward shots by moving out of your routine to make the batter wary and play unusual shots due to hesitancy. How do you make a bit of hardware hesitant or suspicious of which type of ball is coming next?

The batting is easily the most fun when it comes walking out on to the pitch. EA's marketing gimmick `The Century Stick' control plays surprisingly well and involves the use of both analogue stick in making your shot. Not only this but the mechanics, again surprisingly, feels natural and are easily picked up by beginners not used to making shot selections. Basically, the left analogue stick is not only how you position your batsmen but, quite originally, now decides whether you take your shot of the front foot or the back foot and determines your level of attack/defence in shot selection. The right analogue stick determines what sort of shot you will play and, as with the bowling, timing is the key to success. The type of game that you will play determines that there is something for everyone. The Twenty20 mode will give the arcade junkie a quick slogathon, whilst the hardened cricketer can put a whole hungover Sunday aside to recreate the Ashes (not an exact recreation please.)

As for the graphics, they are good. but not as good as you would expect from an EA titles and certainly not as slick as titles that have been running for years such as FIFA or NHL. The sound is good, but there really is not much to the recreation of willow on wood. but on top of this you will have the dulcet tomes of Mr Benaud & Mark Nicholas describing the action.

EA Cricket 07 is as good an attempt as there has been so far at recreating the sport of gentleman and is enjoyable to play. However it is fighting against the feeling the player will get as he runs to bowl yet another ball, that no matter what he does the computer batter will not have been rattled by his previous shots.