Review of Fall To Grace Album by Paloma Faith

Having deservedly battled her way into the limelight after serving her time as a backing singer, Paloma Faith seemed to revel in the attention that she gained upon the release of 'Stone Cold Sober' and her subsequent debut album ('Do You Want The Truth Or Something Beautiful?') She delighted an attentive audience with her kooky dress sense and proved herself to be quite the all-rounded young individual on TV chat shows and quiz shows. Her career may have appeared to have been stuttering, in comparison to the likes of Amy Winehouse and Adele, against whom she is frequently and carelessly pitted. In Paloma Faith, though you had a singer who was naturally left-of-centre, artistic and inventive, insightful and sophisticated. 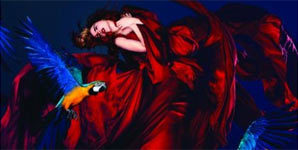 Somehow, though, that never quite seemed to translate into her music. Faith has never made any secret of her serious passion for jazz singers such as Etta James and Billie Holiday; there always seemed to a promise of something stunning, just around the corner. The general assumption was that the career plan tactic was to grab everyone's attention with the poppy stuff, then delve a little deeper into Paloma's passions and into her psyche. That Being the case, 'Fall to Grace' is shocking only in its disappointment. The second studio album from Paloma seems to find the singer in the midst of an even deeper personality crisis than she was before.

Vocally, there are certainly moments when you can hear traces of the breed of artist that Paloma strives to become. In 'Black and Blue' she sets her voice on a roll, showing of her soft vibrato and her jazzy growl. It's also one of the few occasions on the album, where the song lives up to the singer. A tale of life's down and outs, perfect fodder for her bluesy timbre, Paloma kicks loose a little. Elsewhere, though, the material feels half-baked. '30 Minute Love Affair' is possibly the worst offender. The concept of the song goes nowhere beyond the obvious connotations of the title and musically, it sounds as though the love affair lasted longer than it took to write the song. A masterclass in how to make an expensive studio session sound cheap as hell, it sounds like a rejected Stock Aitken & Waterman demo from nineteen eighty something.

Even a hint of redemption, in the opening bars of 'Freedom,' which rolls into existence with a soulful, bluesy, piano led vocal, is crushed to death before it can grow into something beautiful. As the drums kick in, ruining the mood in double time, all atmosphere is lost, all emotion drowned in the brash energy of the song. It encapsulates, perfectly, what the album does as a whole. Dampening all promise of fire or lyrical complexity, Paloma's wit and character is lost here. Working with Nellee Hooper on production duties may have been inspiring for Paloma, but the work that they have served is far from inspired.

At least in the early steps of her career, Paloma seemed to acknowledge that the boundaries placed around pop singers would limit her creativity and her potential to showcase her talent. Instead of seizing the opportunity to break free of those limitations, though, Paloma Faith seems to have barricaded herself into the middle of the road, battened down the hatches and settling for a life as 'The Next Martine McCutcheon. That's not to say that she sounds anything like Martine McCutcheon of course but if we're talking 'lack of musical ambition,' well, there's your benchmark.