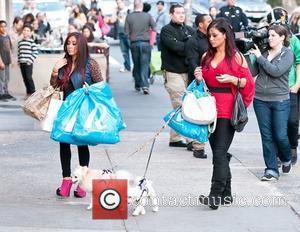 Nicole Polizzi (aka Snooki) has been pictured preparing for impending motherhood with a 'practise doll.' The Jersey Shore star is apparently practising parenting, along with her co-star Jenni Farley. Access Hollywood reported Friday (March 24, 2012) that 'JWoww' and Snooki have been pushing their pretend babies around Jersey City, New Jersey, in prams, swaddled in blankets and feeding the dolls with bottles.

The reality TV pair are filming a Jersey Shore spin-off together. When Snooki announced the news of her pregnancy and her engagement to Jionni Lvalle earlier this month (March 2012), speculation mounted as to whether the self-proclaimed "Princess of Poughkeepsie" would be able to maintain her appearance on the show. She has thus far built her reputation on her wild partying antics so fans of the show feared that her pregnancy would tame her too much to be considered for inclusion on the show. If these recent antics are anything to go by, though, Snooki has had no trouble in finding the entertainment value in having a bun in the oven.

Elsewhere, Jenni and Nicole's cast mate, Mike 'The Situation' Sorrentino is reportedly dealing with substance abuse problems. He has denied illegal drug use but told his fans that he is actually dealing with an addiction to prescription medicines.