Review of Smoke Album by The Bastard Sons

Rightly or wrongly, sometimes you can tell what a band will sound like just from their name. You know Motorhead are going to be filthy, scuzzy, fast and loud; you know Ghost are going to be doomy and weird; and you know that Megadeth aren't going to be singing gentle lullabies. With this in mind, expectations are that York's The B**tard Sons are going to be bringing one hell of a racket to the party with 'Smoke', and they do. Kind of. What you want The B**tard Sons to do is come tearing out of the gate, snarling and looking for brawls but the whole thing sounds quite sterile and polite. 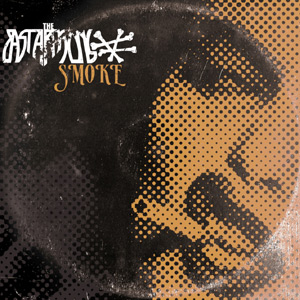 Album opener 'The B**tard' kicks off with a multitude of heavy guitar riffs, piling out of the speakers one after another in a thrashy hardcore punk attack. So far so good, but the lyrics are stupid clichés about partying and there are so many riffs it comes across as more of an overture than a song. In fact, the final riff in the offing here doesn't even fit with the rest of them and the song disappointingly fades out rather than ends. There is no structure here and it sounds like a whole load of bluster and not much else.

Next up is 'Release the Hounds' which has a more or less identical intro to the previous song. Once again, it plays to formula and doesn't have a great deal going for it, apart from a pretty well played classic rock guitar solo. After this, the LP goes from being unfocused to just being downright confused. The B**tard Sons you see refuse to stick to just one genre. You get the clumsy hardcore of 'U.S. Against Them', the half-baked emo of 'A Lie is A Lie', and then you get the post-grunge double header of 'I'm Only A Call Away' which channels Bush, or at a great stretch, the infinitely more interesting 'Helmet', as well as the album's biggest stinker, the pretentiously titled 'Sobre La Muerte II', which sounds like The B**tard Sons' take on Nickelback, goes absolutely nowhere and then fades out.

Unfortunately, The B**tard Sons' kicking and screaming hard rock assault comes off fairly limp, but what mustn't be forgotten is that there are plenty of amazing young British hard rock bands flying under the radar who are worth your time.