Temporary Hero recently dropped his album 'CHET', a tribute to Chet Baker. Hailing from Portland, Maine, Temporary Hero is singer/songwriter Jonah Bell, who did two previous tribute albums: Bing Crosby and Frank Sinatra. Temporary Hero's musical style is probably best described as electronic indie-pop and he has received much acclaim, hitting the Top 20 on Billboard with his song 'Wildjoy'. 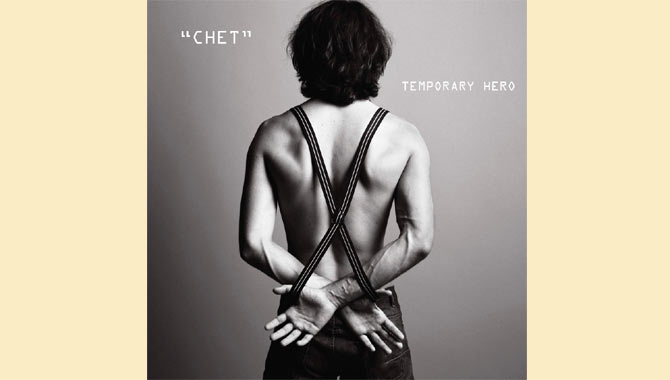 For those who don't know, Chet Baker was a jazz trumpeter and vocalist from Oklahoma. Born in 1929, Baker achieved a modicum of international success for songs like 'My Funny Valentine'. In his heyday, Baker was the poster child for the "cool school" of West Coast jazz, a style of jazz music criticized vehemently by jazz traditionalists. Addicted to heroin for most of his adult life, Baker's lifestyle suffered various ups and downs, mostly downs.

Baker made a comeback of sorts when Elvis Costello asked him to perform a trumpet solo on 'Shipbuilding', thus exposing Baker to a new generation of listeners. Baker rode his small comeback wave for a few years, recording and performing. Sadly, he died at the age of 58.

On 'CHET', Temporary Hero has taken Baker's best known songs and "re-interpreted" them, although frankly it's less of a re-interpretation and more of a desultory recreation. Temporary Hero adds some electronica to the songs, but that's about all. Still, Jonah Bell does a remarkable job of recreating Baker's vocal style and phrasing. Nevertheless, Baker's originals are difficult to surpass because Baker's voice was more suited to his style of jazz.

'CHET' consists of nine tracks, the best of which is 'I Get Along Without You Very Well'; probably because it's the most upbeat song on the album, along with the fact that it resembles the original tune.

The first track, 'My Buddy', consists of snapping fingers and Bell's lethargic vocals. The melody has a 1930s jazz feel to it, sparse and drooping. One is forced to wonder why it was included. 'The Thrill Is Gone' is another example of 1930s jazz. This version includes a chorus that revolves around horse-clopping noises intermingled with the scratches of a needle on vinyl. Put simply, it doesn't work.

A drum machine keeps the beat on 'Time After Time', while Bell warbles laconically in a vain attempt to imitate Baker's "cool school" voice. 'I Fall In Love Too Easily' begins with a ragged flute, which is then joined by Bell's vocals that sound flat. Barber Shop quartet background vocals fail to complement the melody. And 'I've Never Been In Love Before' is a synth-pop rendition of Baker's original. Bell's rendition features echoing vocals and doo-wop background vocals. Despite the annoying reverberations, Bell manages to inject some passion into the lyrics.

Realistically, 'CHET' is a lackluster album. It lacks vivacity. There's nothing unique about the re-interpretation of Baker's tunes. The original songs still remain the definitive versions.