Macklemore and Ryan Lewis come together once again for the release of their second studio LP, entitled 'This Unruly Mess I've Made'. The follow-up to 2012s 'The Heist' has been eagerly-anticipated, with Macklemore becoming a global talking point, and not always for strictly musical reasons. The duo's debut LP was a trendy, catchy affair, and the singles 'Can't Hold Us', 'Same Love' and 'Thrift Shop' received huge success and acclaim. This latest release again tackles social issues and problems such as racial inequality, drug-addiction and unhealthy dietary regimes, while Ryan Lewis' production is as grandiose as ever. 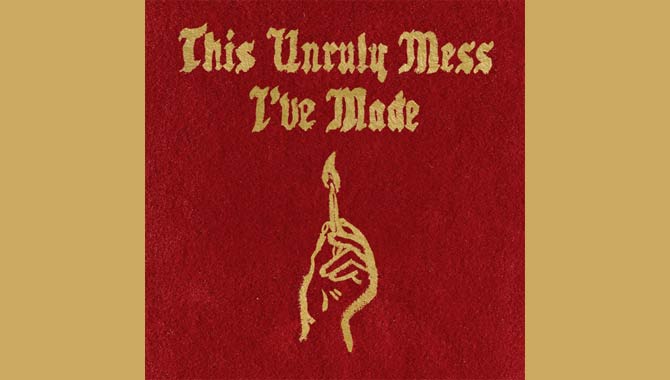 The album's opener 'Light Tunnels' is impressive; it's a six and a half minute epic that finds Macklemore recounting his journey to the 2014 Grammys, where he won the award for the Best Rap Album, beating Kendrick Lamar in what was to be the start of Macklemore's public clashing with those accusing him of being a 'culture vulture', and generally questioning his rightful place in the hip-hop mainstream. The passion in Macklemore's delivery and the intense, epic production from Ryan Lewis makes for a captivating album, and he's certainly opening up with integrity, honesty and personality.

'Downtown' follows, and this features hip-hop veterans and influential figures Melle Mel, Grandmaster Caz and Kool Moe Dee, as well as Eric Nally of Cincinnati band Foxy Shazam. It might seem a little obvious to have this follow a track that so explicitly sets out his intentions though; the opener ends with the lyric "time to explain this unruly mess I've made", and you can't get more blatant than having it as the title of the album. Why criticise though? It's great to hear these pioneers rap alongside a modern artist on such a grand scale, and the track is textured, dramatic and encapsulating. It does descend into some strange musical-esque ending though, which is certainly unexpected if nothing else.

'Brad Pitt's Cousin' is pretty dire. I don't want to hear Macklemore rapping about making his cat more famous than the proverbial you, especially on an album with such a bold supposed claim as this one does. 'Buckshot' is another cool track though, with a real old school influence. This one features legendary New York artists KRS-One and DJ Premier, and it's strangely refreshing to hear these legends alongside such a polarizing, as commercial as you can get MC like Macklemore. The gritty, chaotic production is memorable and hard-hitting, and the graff-theme is surprisingly well executed. 'Kevin' tackles the issue of prescription drug-addiction, over a subtle instrumental, and Macklemore shines when he has a thought-out, meaningful concept. Too many times on 'This Unruly Mess I've Made' though he relies on immature humour and lackluster 'humourous' lines (I have to put that in inverted commas).

'Need To Know' is a standout, and Chance The Rapper delivers another impeccable guest appearance. He's making a habit of it this year, after a stellar verse on Kanye's recent 'The Life Of Pablo' album release. The piano-based, stripped-back production is dope, and the melodic performance of both artists make this track a definite high point. 'Let's Eat' is an example of how the cheesiness of Macklemore and Ryan Lewis can ruin a track, especially with it being such a 'social-issue' driven cut; maybe an ultra-serious dietary awareness themed song would have been abysmal, probably so, but the simply poor humour on here makes it more annoying than entertaining. The elaborate concept-tracks come to a head with the album's finale 'White Privilege II', which addresses Macklemore's standpoint in hip-hop, the deep-rooted social inequality between races and the violence against black people by the police force in America. It's well-executed, and it's ambitious, but I can't help feel that too much of the previous material has been too lighthearted to make his point hit home as hard as it could have done.

So, it's a mixed bag. Macklemore and Ryan Lewis have actually surprised me with this; I liked it a whole lot more than I thought I was going to. The production is crisp and tasteful, and Macklemore can definitely rap. He pushes the boat out too, and takes risks with content where many of his peers, in the somewhat 'safe' radio-friendly market, would be far too afraid to touch on. Equally though 'This Unruly Mess I've Made' is riddled with college-boy jokes and some questionable production choices. He's definitely not gone down the predictable, formulaic route though, and whatever you think of the music, that deserves some respect.