The Idiot Grins are a rock/soul band from Oakland, California, the so-called "East Bay". Their first album, 'Quarry', dropped in 2012 and they've just released their second album, 'Big Man', on which they decided to go almost exclusively soul; almost, because the album includes two exceptional country-rock tunes. 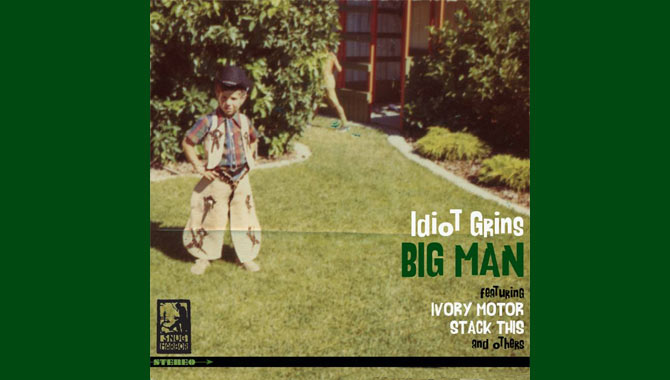 Most of the songs on 'Big Man' were written and produced by Randy Straus, who, like Clark Kent/Superman, leads a double life:  by day, he is a mild-mannered, serious attorney, while by night he is a rocking soul guitarist.  Attorneys that compose music and play guitar are probably on the endangered species list.  As luck would have it, Strauss excels as a songwriter/musician.

Classic soul tunes pervade 'Big Man', complete with a dynamic horn section, a blatting tenor sax and huff-a-chuff melodies.  Essentially, the album attempts to re-create the so-called "Stax sound" of the 1960s, a sound that was defined by Otis Redding. The "Stax sound", attributed to the studio's off-kilter configuration, was subterranean, spacious and gut-wrenching.

'How To Get To' sets the tone of the soul tracks:  big horns along with a bouncy soul beat complement an appealing melody and a chorus that sounds delightfully off-key. 'Poppy Piss' channels Booker T and the MG's, with its straightforward 2/4 beat and an exaggerated sax that toots richly. The title track, 'Big Man', adds just a hint of country western flavor to its Memphis soul melody. The only flaw in the song is the vocalist's phrasing, which is tense and disjointed.

The influence of Sam and Dave arrives with 'Stack This'.  The background vocals provide depth and width to the melody, but the lead vocals lack emotion and are drearily flat.  Of the nine soul songs, 'All Alone' is the highlight.  Feeding a distinct Otis Redding vibe, the tune is simple, casual without being slipshod, with amiable, eloquent lyrics.

'Paso Robles', a country western tune, displays a drawling steel-guitar that ripples just right, along with downhome vocals rounding out the melody.  The chorus is short and sweet, inviting listeners to sing along.  'Sour Man' is either gospel laced country or Chicago soul.  Either way, it's a welcome addition, with what sounds like a Hammond organ providing impetus to the melody.  Both 'Paso Robles' and 'Sour Man' are tumescent with charming emotion.

'Big Man' has some weaknesses, such as vocal continuity, but overall it's better than average, bordering on first-rate. The soul tunes stridently assert their vitality and the country western songs are excellent.  So excellent, in fact, that Idiot Grins should perhaps consider focusing their next album in that direction.