Michael Jackson. King of Pop. After his untimely death back in 2009, long-standing fans can rejoice with this posthumous release of unreleased music. As the album cover suggests, Michael Jackson has had one stellar of a musical career. Destroyer of various world records, pop icon over five decades, and with various public scandals in tow; no one can deny the magnitude of Michael Jackson's impact upon the music scene. Whilst cynics may dismiss this LP for an attempt of milking the potential cash machine, the result is actually a decent and solid offering that reminds us why the world fell in love with this still-reigning King of Pop. 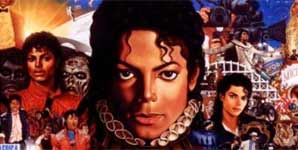 The route back down nostalgia lane starts off with Hold My Hand, a track, bittersweet all the way up to the final piano notes, that is truly beautiful. Michael's sweet vocals, both literally and metaphorically, haunt us. Whilst this is sure to become a new fan favourite, this track was released as an official single yet it didn't actually chart well across the world, and thus probably telling us something about Michael's future posthumous fate. Michael adopts the token choir that brings the track to a stunning end, as similarly seen in the mid-tempo Keep Your Head Up, which exemplifies how Michael still harbours his great vocal skills, even if he is singing sickly lyrics such as 'all you need is love' - but to be fair, this is what he has always made sound cool.

From the traditional RnB tracks, to the retro pop, Michael still seems to hold the capability to effortlessly transgress music genres. His duet with Lenny Kravitz, Another Day, is an average rock pop track that alludes to Michael's later 90s sound and contains the clichÃ©d 'hoo-hoo' that will certainly raise hairs upon your arms. Hollywood Tonight is a great, albeit 90s sounding pop track that is extremely catchy. With its staple repetitive chorus, it really feels like we have all taken a trip on a time machine back to Michael's music catalogues of the early 90s. Monster, likewise, sounds like the lovechild of his two colossal hits Thriller and Scream to create what probably would have been a huge world hit if Michael was still alive today, especially with the addition of 50 Cent. The only criticism one may make here is the fact that these tracks sometimes come across a bit too out-dated, and thus if this really is the 'best' of the unreleased tracks out there, the Jackson camp may start finding it difficult to construct decent-enough future posthumous releases. This is further highlighted by the presence of some real filler tracks such as Best of Joy and Behind the Mask that really bring nothing to the collection.

It wouldn't be a decent Jackson record if it wasn't surrounded by controversy. Breaking News is a great track that touches upon the media's obsession with the pop icon; ironically a track further surrounded by dispute as fans have claimed that it may not even be Jackson's own voice on the track. Furthermore, both Jackson's lawyer and other Pop stars such as Will.I.Am have deemed it disrespectful that these tracks have been released, particularly when Michael was so adamant that they shouldn't be. Either way, even in death, Michael Jackson is still establishing himself as a talking point. There is no doubt that fans will lap this up. The result is decent and it would, dead or alive, stand as a great addition to what looks to be a very lengthy back-catalogue. As Michael Jackson's sleek vocals haunt us, there is no denying in this fundamental fact; Michael Jackson really was something.