Review of Love is Blind EP by Haunts 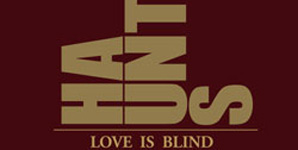 The band has chosen 'Love is Blind' as the final release from their self titled debut album. The title track from this 5 track E.P is more infectious than a tramp sneezing in your face, and I'm sure it'll not be long until Haunts have a fan base of pandemic proportion. Banks distinctively resonant vocals smoothly compliment energetic and intriguing melodies, which bubble with originality.

The core of their songs have an electro friendly vibe about them and the E.P showcases some of the bands own remixed versions of album track 'Black eyed girl' and previous single 'Underground'. The remixes hold on to the energy exuded by the originals, but successfully stir in some saucy electro beats, that party it up a bit.

Keep your eyes peeled for the album, this is definitely a band to get excited about.