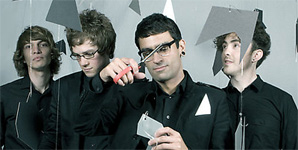 Contactmusic managed to catch up with HAUNTS before a recent gig in Manchester. This is what they had to say:

Contactmusic: First, let's start with a bit of history about you guys, How long have you been together as Haunts?
Banks: Couple of Years
Alex: Yeah, a couple of years.
Banks: We've pretty much been playing the circuit for about a decade.
Gareth: Feels like a couple of decades.
Banks: We all met up just from the scene we were in. We were all in different bands, touring around the place.
Alex: Paying our dues
Gareth: Playing the same haunts, but with different bands. That's where the name came from.
Banks: Yeah, we pretty much started off playing progressive, neoclassical, technical. funk.
Rory: Sounds like a bit of a mixed bag?
Banks: Yeah, it was a mixed bag.
Gareth: That's what we were going to call the band. Mixed bag
Banks: Eh, what else were we going to call the band?
Alex: Flying daggers of darkness
Gareth: Englishmen abroad.
Banks: Poo Hammer!

Contactmusic: Did you play any gigs under the alternative names or did Haunts just stick first time?
Gareth: We played a few gigs under Poo Hammer, but it didn't really kick off.
Banks: People can't say Haunts though. We've been around Europe and people just can't pronounce it.
Alex: If you have a section later on about giving out advice to new bands starting out then don't have a band that begins with H. When you get to Europe people just can't say it.
Banks: We get a lot of (in a faux German accent) Hownds? People usually just say 'What? What? Horns? What? Horse?
Alex: The best thing was when we turned up outside a gig in London and the doorman was like 'Are you the band? And we were like 'Yeah we're Haunts' and he was like, 'What? Prawns?'
Banks: We think we should be called Hounds or Horse.
Alex: That's what everyone thinks we're called anyway!

Contactmusic: Quite curious about your record label Black Records and your side project Black Teeth. How did that come about?
Banks: It's a proper little Indie label, they let us do pretty much whatever we want.
Alex: Even if that's ruining everything!!! Ha ha!
Banks: Yeah, they let us make our own mistakes. they don't interfere with our crazy decisions even if we haemorrhage money releasing vinyl records with our side projects and adding gold teeth to our t-shirt designs! But seriously, they're really cool... they're just a couple of guys who work for other labels and this is their little side label.
Alex: They're the kind of guys who are stuck in the middle of the industry and aren't necessarily able to do what they want to do. They're proper music fans and they set up their own label.

Contactmusic: So how did you get your foot in the door? It must be pretty hard to get a break in the industry these days.
Banks: Early on we had one song which we put up on MySpace and straight away loads of labels were getting in touch. Maybe it was because we'd been in other bands or maybe because it was something fresh and interesting. There was a lot of buzz and a lot of labels were interested.
Alex: I think these days the industry gets such a boner for anything new. They must search around MySpace looking for pages that have just been made.
Banks: And we had a good photo!
Alex: We had a wicked photo!
Banks: Yeah but a lot of labels were interested but were like, 'We don't know how to sell this. we don't know how to market you because you don't really sound like anyone else.'
Alex: And also because we only had one song!
Banks: Well we had a few songs. by the time we'd written our album and recorded it they'd lost a bit of interest.I guess when you've got a buzz you've really got to act on the buzz like straight away, but we didn't want to rush our masterpiece debut.
Alex: Looking back on it we maybe should have rushed it!!
Banks: The songs were mostly demos anyway but they sounded better and had a better vibe.
Alex: We had this big idea of going back and re-recording everything so we went back into the studio and cut everything live, as a band. Some of the songs we used the new versions but a lot of them we just used the old versions.
Banks: All the vocals were done in my bedroom.

Contactmusic: Have you found that record labels that have approached you have tried to push you into a pigeon hole in terms of your sound?
Banks: I think with Haunts, we're just an impermeable thing.
Alex: We're trying to make our own little Haunts shaped hole. They tried putting us on next to 'The Wombats' but that didn't really work and then we were supporting 'The Game' in Holland and everyone thought we were going to be a rap band.
Banks: A lot of people in the industry were like, 'Why don't you do this?' And we just said no. We just didn't want to sound like anyone else, that was our goal.
Alex: Our local scene was really competitive too, everyone was just trying to come up with things like, 'I can do something that you could never even dream of!' and we were all trying to outrank each other and then we just thought, 'This is bullshit, we're going to do something you could never even dream of!'
Banks: It's just a longer journey when you're a bit more original.
Alex: It's a lot more work.
Banks: It just takes a lot more time for people to work out who you really are. All the big artists didn't really make it until their 3rd or 4th album but now it's like if your first album isn't a big hit, you're dropped.
Alex: I still don't know if that's technically true. You've always got one band that's been slaving forever, and they can't find their niche and then they get a little bit of interest and everyone is like, 'Oh yeah!' and then loads of other bands come along that are like, 'I don't care what I sound like I just want to be cool' and then you get all these identikit bands and it just ruins it for the band that tried for ages to make it.
Banks: Or you get a band that just rebrands themselves and they go, 'Oh this isn't working' and so they change their name and get new clothes and get synths instead of guitars. It's weird, why don't they just keep the name they've got? There's loads of bands out there like that, where every album just sounds completely different but people don't want that.

Contactmusic: So are you guys trying to amalgamate Black Teeth into Haunts?
Banks: No that's the remixes. We started off doing it as Haunts but then people got really confused because we'd release a banging remix and then we'd release a heavy indie rock tune so we just decided to release the remix stuff as Black Teeth instead.

Contactmusic: So how's the tour going so far?
Banks: Yeah really well. I think the most fun we've had is with the support shows. It pushes you more because you've got to walk on stage and win people over whereas when you're headlining then people have come along to see you so it's a different dynamic.
Alex: You have a chance to allow your music to fall on fresh ears. These are the longest sets we've played though. We're really looking forward to getting stuck into the second album so it gives us an opportunity to get the playing live bit out of our system before we get back into the studio.
Banks: I'd be pretty disappointed if people came to our headlining shows and didn't like it. That'd be weird! You can only assume they're going to like it!
Alex: It's not like the old days when you hear about a band then you'd just have to go and see them live to check them out. you just log onto MySpace now. I sound really old now!!!

Contactmusic: In some ways gigs are better because you find now that bands produce themselves so well in the studio these days that when they play live they sound nothing like their album, what do you think?
Banks: It all goes hand in hand, with the digital revolution, you can make a shit band sound good.
Alex: When you're playing live you get to prove yourself.
Banks: You can listen to our record and it could well be that we'd tweaked it all and then you'd find out the minute we got on stage.
Alex: We did go back into the studio and worked on some of our songs but then we thought that it all just sounded a little too polished.
Banks: There's sounds on the record that we don't do on stage. When we play live it's a bit more raucous.

Contactmusic: What was it like touring with the Eagles of Death Metal?
Alex: They highlighted what being in a band is all about because when you're trying to get known you can get a little disillusioned and you need someone like Jesse to come along and just reaffirm what it's all about. Jesse is all about the party!
Banks: It's cool that they really like watching us play.

Contactmusic: How did you get round to supporting them? Did they hand pick you?
Banks: No, but they did say that they had been checking us out on YouTube.

Morag: It must be nice as well to be supported by a band that has a bit more clout in the industry too.
Alex: Especially with someone like Jesse. He's such a storyteller.
Banks: He's always talking about us in interviews, he's a really good guy. And they party hard!

Contactmusic: Do you ever get called 'The Haunts'? Does it ever piss you off?
Banks: It used to really annoy me!
Alex: It's funny when you start out, you read so much into things that just really aren't important. We used to rip off the name on our room if it had 'The Haunts' on it! I know what you mean though, there was a surge of 'The' bands and if you had that name you were 'in'.
Banks: I don't get it though, you don't say The Blur or The Oasis. it's just Haunts.

Check out their new single 'Love is Blind' in the reviews section!