Read our review of Time Crisis: Razing Storm on the Sony PS3

Bringing a collection of arcade favourites and an all new FPS mode together on one disc, Time Crisis: Razing Storm attempts to capture all the joy and excitement of the undisputed "king of arcade on-rails shooters" into your living room. Included are faithful recreations of the original Time Crisis 4 arcade game, Deadstorm Pirates and the more recent Razing Storm, each with their own unique styles and gameplay components. On top of this is the all new first person shooter based around the events in the Razing Storm arcade game, unfortunately it is this component that lets the collection down, sitting uncomfortably somewhere between an on-rails shooter and a more modern FPS. Still, with a huge wealth of content and PlayStation Move compatibility, there is plenty here to get excited about. 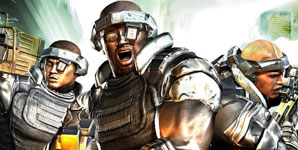 As anyone who has spent time pumping coins into them knows, the Time Crisis arcade games are best enjoyed with a wingman, back to back, blasting through waves and waves of enemies. The same is true here with the three arcade ports offering enough friendly competition and hair-trigger excitement to warrant multiple run-throughs with a friend. Which is just as well as each game can seemingly be completed in around 20-30 minutes. Requiring a good aim and quick reflexes they are inherently satisfying to play. The games, although essentially the same at heart (point gun at enemies, shoot them) do have enough differences between them to make them feel individual. Time Crisis 4 for example sees players swapping rapidly between different weapons and ducking in and out of cover, whereas Deadstorm Pirates is much simpler and includes sections where players have to twirl their controllers around. The plots for each game are the standard overblown nonsense reserved for bargain bin b-movies and are filled with all kinds of implausible scenarios and plenty of truly cringe worthy macho dialogue. But ultimately this serves to make the games more fun to play and laugh at, and anyway, who ever played a Time Crisis game to see character development and intrigue?

As faithful recreations as you can get, the arcade ports do suffer slightly when seen on the small screen of home. Particularly hectic scenes that would be clear in arcades can often rapidly get confusing and cluttered at home, especially when trying to track your gun reticule through explosion after explosion. Another difference is that without paying money for a go, dying at home holds no real consequence and as such the adrenaline levels never reach as high as they do in the arcade.

Unfortunately the new FPS adventure found in Time Crisis: Razing Storm, is a real let down. Badly thought out and crippled by frustrating controls, it poorly attempts to occupy a third space between on- and off-rails shooters, bringing the worst elements of each to the fore. Based in the same universe as the Razing Storm arcade game it includes a good few hours of free roaming gameplay. Playing through them however is hardly a pleasurable thing as neither the movement nor aiming controls feel comfortable or responsive. Typically recurring frustrations include staring at the ceiling instead of ducking for cover and turning way too slowly to face enemies as they shoot at you. Furthermore, poor level design and unbelievably dumb enemy AI make it feel about 4-5 years out of date. All in all it's a poor experience made even more obvious in a genre dominated by the super-slick COD games.

Whilst Time Crisis: Razing Storm's FPS component is definitely the weak link, the arcade conversions should provide enough trigger happy entertainment to keep fans of the series happy. The compatibility with the new PlayStation Move controller also means, more so than ever, that Time Crisis: Razing Storm will definitely be making it into Christmas stockings this year.