Review of Be Ready Album by Dennis Hopper Choppers

Ben Nicholls' current band Dennis Hopper Choppers have taken a long time to come to the boil but unlike many bands on the never-ending gig circuit, this is because the heat has only recently been turned up. Whilst gigging in New York, Nicholls' saw the rockabilly one-man-band Hasil Adkins play and immediately considered the freedom and power of creating a band's worth of music alone. Easy Rider's depiction of self-discovery through Pete Fonda and Dennis Hopper's journey across the American Southwest is the intended parallel of Nicholls' own musical journey through the same region. 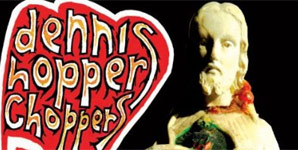 His musical education had really begun at the age of 12 in Worthing, when a local library sold off all its vinyl for pennies. Having seen his first band implode as their drummer joined the army, stints in the Silver Jets, The High Class Family Butchers and Kid came and went before Nicholls' borrowed a bass drum and a high hat and Dennis Hopper Choppers mark one were born. Rigging up some organ bass pedals and a 60's vox continental organ, all that was left was to try and work out how to "whack it all at the same time."

The brass beginnings to 'Be Ready' deliberately evoke the dusty landscape beauty of a spaghetti western film. Indeed the house Nicholls' used to pen the first Chopper LP (this is number two) was a mere stones throw from where 'The Good, The Bad and The Ugly' was filmed in Spain. The latter two candidly missing as he sings without bitterness of a love seemingly out of reach on 'Good To Me.'

By 'My Destiny,' Nicholls' is a lot more sure of himself, reflected not only in his lyrics but in the assured beat and measured riff. The arrangements are punchy and bold as you would expect to accompany such a lyrical refrain as:

You are my destiny
I can feel myself on fire when you get close to me.

The rockabilly influence is clear in 'All Could Come True' and 'Razor Gang', the former a country sing-along complete with cowboys riding into sunset and the latter a fast-paced bar room brawl with chugging guitars and a rolling beat.

Ben Hillier (Blur, Doves, Elbow) agreed to produce 'Be Ready' if they did it quickly. Nicholls' promptly arranged his own motorcycle gang and DHC became an eight man band, with the album recorded live in a mere two days. The live instruments give the record it's rawness, such emotion would have been lost had Nicholls' continued down his one-man-band route and recorded each instrument individually.

The delicate introduction to 'Girl Walked Out of Town' provides the perfect canvas for Nicholls' rich voice. His blend of melancholy and hopeful romance is beautifully juxtaposed with the downbeat harmonic and gentle strings of the verse against the groove and backed vocals of the chorus.

The days go easier since she came along.

From learning the stand up double bass as a youth to tours in America to DHC in its earliest guise, Nicholls has had quite a journey. DHC began as a one-man-band with Nicholls lugging a group's worth of equipment up and down Britain's motorways alone. That self liberation and sheer love for his art is poetically illustrated by the musician using his guitar amp for a pillow whilst sleeping between gigs in his clapped out van.

It has taken a while for Nicholls to send out the invitations to his musical party but it was worth the wait and whilst he may not stay a Chopper forever, it is definitely worth showing up for a whisky or two while he is. 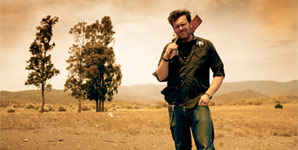