It would be easy to ridicule Beady Eye, essentially Oasis sans Noel. It would be easy to snipe, to dismiss, to fill up a review with 'hilarious' comments about the band, their fan-base and what this album says about the current musical climate. You know what? It is easy, but that doesn't mean it's not fun. And so that's exactly what this review will contain. 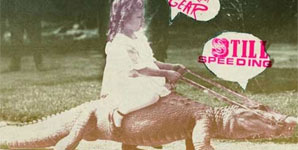 The thing is; Beady Eye make it so easy. I'd love for Different Gear, Still Speeding to be a return to form, and to lavish praise on a three-piece free of the shackles of their former bands governing ego. I'd love, even moreso than this, to say that Andy Bell, he of disgracefully under-rated shoegazers Ride, had been encouraged to take more of a leading role and press the windswept euphoria of his earlier band onto Oasis's dated pub-rock template. But I can't. Because 'Different Gear, Still Speeding' is sh*t. It's really, really f*cking sh*t.

Now I don't have to resort to swearing, but I will. I can hardly avoid it. Beady Eye have created one of the most turgid and uninspiring albums that I have ever heard. The quality is extremely poor throughout; Liam sounds like he is forcing out a beer sh*t in the chorus of 'Millionaire'. At least I presume it's a chorus. By 'Beatles and Stones', one of many hilariously dreadful names given to the thirteen (unlucky for us) 'songs' on the full-length (see also 'Standing On The Edge Of The Noise', on which he sounds bored out of his skull, perhaps reaching the level of disappointment felt by everyone else when concerning his more recent musical offerings).

Beyond opener 'Four Letter Word' (the intro is used for some football-focused advert, you probably thought it was an Arctic Monkeys track) the album sounds like it has been recorded for about Â£50, and Â£45 of this could be costed to the 'sh*tty f*cking reverb' department. Of course, in both its structure and production no post-21st century Gallagher release could be reviewed without a mention of The Beatles, so here we go; The Beatles.