Wow. Wild Flag is one of the best début albums you'll hear this year, an indie rock album with real bite, flair, and confidence. Rumbling inexorably forward, powered by snarling, gnarling riffs and adorned with clever vocal harmonies, subtly sarcastic lyrics, and bursts of catchy keyboard, it starts strongly and gets better. 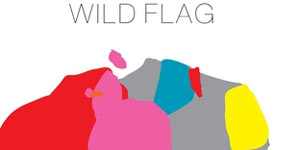 You could call the band responsible a super-group, but none of the musicians are household names unless your household consists only of thirty-something indie kids. Vocalist-guitarist Mary Timony was the creative force behind the intentionally awkward feminist indie group Helium, and keyboardist Rebecca Cole played as part of a determinedly poppy Elephant Six combo called The Minders. Carrie Brownstein (vocals/guitar) and drummer Janet Weiss were key members of Sleater-Kinney, who started out as as a pretty cool pop-punk group and just kept improving, eventually bowing out with the dense, heavy, seething rock and roll statement The Woods, one of the past decade's more surprising and interesting records. To an extent, Wild Flag picks up where The Woods left off. Brownstein and Weiss once again borrow some of the trappings of sixties and seventies rock music. They show faith in the power of the guitar riff and aren't afraid of lengthy freak-outs. There's a difference though: when Sleater-Kinney nodded towards classic rock (albeit 'classic rock' understood in a very broad sense, so that it incorporated The Stooges as well as The Rolling Stones and Led Zeppelin), it seemed like a capital-S Statement, a riot-grrl inspired female reclamation of musical gestures which had somehow become associated with a tedious sort of over-assertive masculinity. When Wild Flag do it, it just sounds like they're having fun.

'Fun' is the key word here: there's nothing especially dark or difficult about Wild Flag, nothing complicated or academic. The lyrics are sometimes sardonic, often knowing, and occasionally world-weary, but nevertheless the album's mood is encapsulated by a couple of lines from 'Boom': ''One two three four/I like the way you move around the floor'. Forget complex statements, they're here to party. There's plenty here that you'll want to jump around to or sing along with; plenty of great hooks and choruses, plenty of moments which that you'll want to hear again. The album's classic rock gestures frequently rub up against Cole's simple, catchy keyboard flourishes and some excellent vocal harmonies which nod towards sixties girl groups. On tracks like 'Future Crimes' and (especially) 'Something Came Over Me', the effect is intoxicating. The heavier 'Racehorse', a comparatively lengthy track which builds and builds into a sweaty psychedelic boogie, offers something different but equally enjoyable.

Wild Flag is unabashedly spirited, raucous, and loud. It's a celebration of the thrill you can get from playing or listening to rock and roll, and a tribute to the adrenaline rush that crashing, visceral music can induce. More simply, it's a tremendous album.