At some point in the last few years, metal seems to have succeeded in clawing back the credibility which a lot of mainstream music journalists and fans have always wanted to deny it. There's no denying that the genre has been through some fallow periods in the past - it seemed to spend most of the seventies obsessed with elves and tight leather trousers, and most of the late nineties channelling directionless, pointless adolescent rage - but now it wants to pick itself up, dust itself down, and pretend that nothing untoward ever happened. On the one hand, bands like Boris, Isis and Mastodon have been reaching out to indie kids with their own distinctive brands of arty, experimental prog-metal. Meanwhile a whole bunch of other groups have tried to strip heavy music back to basics, cutting away the cringe-worthy lyrics, flabby soloing and po-faced instrumental virtuosity and focusing on the brutal riffs. There's no clear dividing line between the two camps (although one could say that while the bands in the first camp want to create art, those in the second are more interested in getting drunk and jumping around), and both of them have succeeded in legitimising a form of music that non-metal music magazines previously regarded as something of an embarrassment. In a sense, one could see this new compilation by the folk who run London-based club night New Heavy Sounds as a belated celebration of this legitimacy. It's a collection of heavy, riff-based music featuring metal bands who have toured with indie groups, punk bands trying out metal sounds, and progressive rock groups disguised as metallers, all of whom have turned their amps up to eleven. 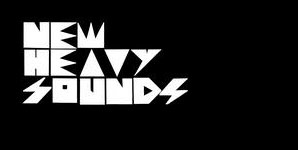 Despite the diverse backgrounds of the bands featured, there's a degree of single-mindedness to their contributions. If, at any given moment, your body isn't being shaken by fierce riffing, that'll be because it's about to be shaken by fierce riffing. Physics-obsessed Leeds wrecking crew Chickenhawk start things off on the right foot with the pummelling 'Son Of Cern', which is the musical equivalent of a war zone: drumbeats drop like shells, and guitars roar overhead like jet fighters. Their aggression and intensity is replicated by little-heralded bands like Bad Guys, We Rock Like Girls Don't, Godzilla Black, Bad For Lazarus and Turbowolf, who contribute a solo which sounds like somebody torturing a cat, and may actually be somebody torturing a cat. Pulled Apart By Horses yelp frantically about riding a mammoth during the memorably titled 'E=MC Hammer'; it makes a certain amount of sense that the very next track sees Castrovalva screaming splendid nonsense about a triceratops. Who needs love when you can write songs about massive pre-historic creatures? These Monsters bravely attempt to slow things down during the meandering, prog-inflected 'Harry Patton', but you'll still be short of breath by the time Blacklisters wrap things up by channelling rambunctious punk godhead David Yow.

There are weaker moments, sure - bizarrely popular punk troupe Rolo Tomassi's fiddly, ridiculous hardcore sounds as limp as ever, for instance - but New Heavy Sounds is a largely successful album. It's legitimate, however, to ask why anybody with internet access would buy a compilation like this. Why pay for what is freely and legally available on various websites and streaming platforms? Perhaps the answer is to think of it like a mixtape created by someone you've just met, a way of discovering great new music and rediscovering songs you shouldn't have been neglecting. And anybody who rates Kong's raucous, abrasive punk-rock arse-kicker 'Sport' is welcome to make me as many mixtapes as they like.