While Michael Benjamin Lerner's Seattle band Telekinesis is relatively unknown in the UK, they've managed to build a solid fan base in the States since 2009. That's thanks in part to favourable airplay by NPR stations across the country. Third album Dormarion is an irresistible mix of feedback-laden guitars, synths and Indie attitude. Clocking in at just less than 40 minutes, it's also suitably short, leaving you wanting more. 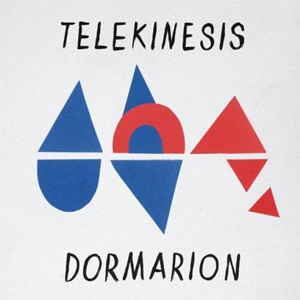 Opener 'Power Lines' suggests that the album is going to be somewhat lo-fi and quiet. Indeed, the first minute is just Lerner and an acoustic guitar, but Dormarion springs into life after that with a wall of sound. It's a dysfunctional ode to youth ("Don't mess up your hair because we're destined to fail. When I was young I thought I was a power line."), that has aspirations towards being the twenty first century 'Born To Run'. While it doesn't quite elevate itself to that height, the catchy riffs and quirky organ tell you everything you need to know about the album - it's going to be fun.

What's also evident is that despite the loud guitars and frenetic drumming, there's a simplicity to the songs that makes them endearing. Lerner's voice struggles at times, because his high-pitched delivery gets a little lost in the mix. But there's no doubting the material here is incredibly catchy. When Telekinesis shift gear and turn into a Synthpop band on 'Ever True' for example, Lerner's vocal actually seems more at home amongst the drum machines and strings because it's not battling against a wall of guitars.