Skate And Surf Festival 2015 Splashes Down In NJ Next Month

Continue reading: Skate And Surf Festival 2015 Splashes Down In NJ Next Month

In support of their new album 'Get Hurt', The Gaslight Anthem will be touring North America in Spring 2015.

The Gaslight Anthem's upcoming Spring Tour has been announced, promoting their new album 'Get Hurt'. They will be performing across North America, with support from Northcote, The Scandals and Sammy Kay. 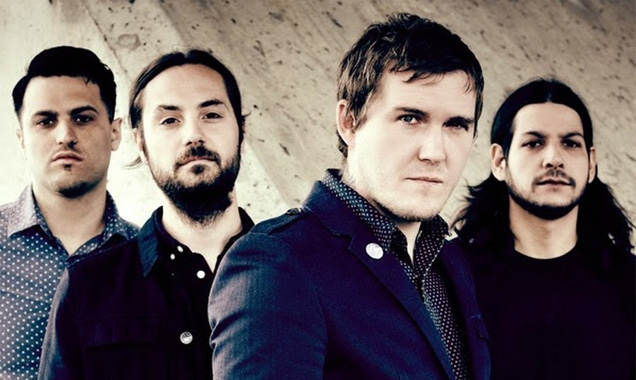 The Gaslight Anthem on tour in the US

Producer Mike Crossey recorded with the band in legendary Blackbird Studios in Nashville, to create "Get Hurt". Crossey has worked with the likes of The 1975, Arctic Monkeys, and Jake Bugg. Their grungey, synthetic sound is reflected, especially through their hard-hitting track '1,000 Years'.

Continue reading: Get Ready For 'Get Hurt' On Tour! The Gaslight Anthem Hit The Road As Spring Approaches

Not exactly a surprise that a member of The Wildhearts did a solo album this year, but CJs first solo work in seven years is an absolute mother of a sonic gut punch. The power pop blitzkrieg comes thick and fast with songs like 'Better Late Than Never', 'Devil' and the album highlight 'Vitriol'. CJ took the opportunity of his second solo outing to prove that The Wildhearts was never a one man show.

New Orleans' favourite Halloween festival the Voodoo Music & Arts Experience is back in its fourteenth year bringing you the true meaning of rock 'n' roll plus a special appearance from one of the city's favourite music veterans.

Voodoo Fest hits City Park every year on the weekend closest to Halloween which this year is November 1st - 3rd. It made its debut in 1999 with the likes of Wyclef Jean and the Refugee All-Stars, The Roots and, of course, New Orleans' own blues pioneer Dr. John - aka The Night Tripper - who makes a grand return to the event this year only months after landing his sixth Grammy award for his album 'Locked Down'. Long may he remain the epitome of the city's spectacular music scene!

By David Edwards in Music Reviews on 03 April 2013

There is a spit-flecked, fist-pumping, heartstring-twanging joy in witnessing the communal bond between band and crowd at a Gaslight Anthem show. It's abundantly clear from the huge roar that greets the opening 'High Lonesome' that the T-Shirts and myriad tattoos proclaiming their adoration towards the New Jersey quartet are a real and true expression of honest devotion. And for the most part of tonight, it's a devotion entirely justified and returned back. The initial quadruple salvo of 'High Lonesome', 'The '59 Sound', 'The Patient Ferry Wheel' and 'Even Cowgirls Get The Blues' from breakthrough 2008 record The '59 Sound threatens to spin the wheels with too much initial throttle but then eases comfortably into a selection of tracks from American Slang, with the deep and troubled Americana rock drama of 'Orphans' being particularly stirring. As a live outfit, they're exceptionally well-honed and finely-drilled: delivering their missives with a taut muscularity that helps define and refine the ragged corners and broken bottles they sing so yearningly about.

In construct and delivery, The Gaslight Anthem seldom fail to hit their mark, or at least graze its outline. Brian Fallon playfully jokes with the crowd about football, American stereotypes and various anecdotes in an open and endearingly self-deprecating manner, being greeted in similarly good humour by the bustling, eager crowd. Taking the approach of playing a selection of tracks from each of their individual four records as specific segments is certainly an unusual one, but neatly serves to display how they've developed as a band over the years. The habitual Springsteen comparisons are a lazy and over-used method of describing The Gaslight Anthem's output but if I may venture a compliment using one such comparison: just like their fellow New Jersey native, they've not been afraid to develop and change their sound, growing more confident in pushing tempos and expanding their musical envelope. And it's clear tonight that this is the case, though some of the tracks from new album Handwritten do fall that little bit more easily through the cracks in the crowd's attention, coming as they do at the end of the main set where feet are growing tired, glasses growing empty and bladders growing fuller. That being said, the explosion when they then tear into 'Great Expectations' is thrilling to behold and when they do return to their latest record for the initial set closer, 'Keepsake' is quite sublime in its dirty blues howl and its rasping pleas: growing like a wave as the crowd catch on to its swelling momentum.

Arriving back for the encore with grins and thanks, the double-tap of 'Mulholland Drive' (another of the best tracks from Handwritten) and a storming, arm-waving 'Too Much Blood' is followed by an unexpected closer for tonight's show. Though Fallon has been wearing a "The Who" T-Shirt all night, we're assuming it was just sartorial homage. Not entirely. A trilling, repetitive and familiar electronic guitar effect snakes around the Academy but we only realise quite what is happening when the huge chords to 'Baba O'Riley' come on in. And to their credit, they do it brilliantly - Fallon achieving the necessary bite and bluster in the vocal and the band looking like they're having the time of their life. I'm not sure which I'm more surprised about - the band taking on a stone-cold classic and doing it absolute justice, or the fact that all the kids seem to know every word - but it's a weirdly befitting and thrilling end to tonight's proceedings. It's hard to call The Gaslight Anthem a cult band when they're filling out large venues on consecutive cold nights in Manchester, Glasgow and London; but regardless of venue size, there is a connection in their live shows that genuinely warms the heart in a day and age where the stage barriers are physically and metaphorically larger than at any time in the past. What they do might seem initially simple from a musical standpoint, but there's a surfeit of heart and soul deep down in there that grows like a flower from a battered bulb in the live arena.

Radio friendly rockers The Gaslight Anthem have returned with their fourth full-length release Handwritten, channelling the classic New Jersey sound into today's consciousness. Following an unprecedented level of exposure into the public gaze after high profile festival appearances and tours, the band have found themselves in a position where fans across the world will be clamouring for new material and with this album, they have duly obliged.

1 2 Next »
The Gaslight Anthem