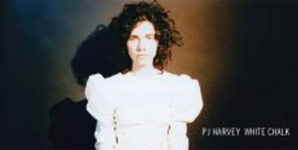 Polly Jean Harvey has never done anything but totally fu**ing flourish, no matter what she has done. From the balls-out, armpit-hair out, scratchy, primal rock howling of her 4 track demos to the elegantly grown-up ‘Stories From The City, Stories From the Sea’ and back halfway between the two with ‘Uh-Huh Her’, she stands alone, never resting easy under any journalistic tagging system. Whether flouncing about a Glastonbury stage in a pink leotard, or strumming sensually on a guitar that dwarfs her miniscule frame, she is never less than enticing.

And so to album Number Eight. Eschewing her guitar for a piano, on most of the tracks, is something of a genius move. Never one to dwell in a comfort zone, the less-than expert playing of the piano lends the songs a naivety, denied by the lyrical content and also harks back to the early days of her guitar playing, when you could almost sense her fingers scraping clumsily up the fret board.

That’s not to say, however, that White Chalk sounds in any way amateur. It has a kookiness not unlike fellow pianist Frida Hyvonen and a gentleness befitting of a woman who has run through the gamut of angst and angers and found confidence in articulating them. The histrionics on ‘The Mountain’ are insane, in both the best and worst senses of that word. At the other end of the scale, ‘Dear Darkness’ is elegiac, tiptoeing on the piano keyboard, delivered as though the words are coming out of her mouth, and the notes springing forth from her fingers, for the very first time.

PJ Harvey's vocals seem tamed, to some extent; perhaps by the introduction of the piano into the fray. So it’s not until the third or fourth listen that the vocals and lyrics really hammer home: until then, the whole album is like a cloud of emotion and atmosphere hanging in the background, waiting to be invited in.

I’d put the kettle on, the company is worth the wait.