The quality of The Pet Shop Boys' best moments in unquestionable. Having cottoned on to the potential of dance music fairly early, they reinvigorated British pop with a string of flamboyant singles which counter-intuitively combined gaudy keyboard riffs with pained, sometimes maudlin vocals and lyrics. What can be called into question, however, is the necessity of yet another compilation of their better moments, especially one as lacklustre as Ultimate Pet Shop Boys. 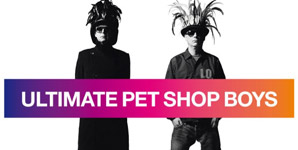 The standard edition of this album collects some, but by no means all, of the band's best moments in chronological order. Most of the biggest hits are here: 'West End Girls', 'Heart', 'Suburbia', 'It's A Sin', and so on. Children of the eighties who grew up singing along to Neil Tennant's tales of small-town boredom and doomed romance will get a cheap thrill from hearing so many stellar pop songs back-to-back. There are many iconic moments here, from the dogs barking at the start of 'Suburbia' to the euphoric keyboard riff which punctuates Tennant's rueful and romantic vocal performance during their cover of 'Always On My Mind'. However, there also iconic moments missing. The standard edition Ultimate Pet Shop Boys does not include 'Rent', or 'A Red Letter Day', or 'Opportunities (Let's Make Lots Of Money)', or a number of their other better-known songs. It's difficult to understand why. If songs like 'A Red Letter Day' have been excluded because this compilation is meant to be a streamlined collection of their biggest hits, then why have weaker and relatively obscure later songs like 'New York City Boy', 'Miracles', and the new single 'Together' been included? If the reason for including these songs at the expense of their earlier material is to give a broad overview of their career, then why do superior later tracks like 'You Only Tell Me You Love Me When You're Drunk' not make an appearance? If 'Rent' has been excluded on the basis that it's not as good as any of the songs here, then I'd venture to suggest that whichever Parlophone administrative assistant made the decision invest in some cotton buds.

The special edition of Ultimate Pet Shop Boys solves some of the standard edition's problems by including a surprisingly thorough DVD overview of their career. The DVD includes a host of television performances (including versions of all the missing songs mentioned above) and their extravagant set at Glastonbury 2010. It will surely be this compilation's main selling point. There is little point in investing in the standard edition when better 'Best Of' collections, such as the 2003 release Pop Art, are available. However, fans of the band who want a record of their live performances should consider buying the deluxe package just for the DVD. They could always use the CD as a coaster.