"Are you ready London?" - Mattiel Brown asked a sold out crowd at London's Lafayette before she and Jonah Swilley launched themselves into a 23 track setlist that dipped into every part of their back catalogue, including their 2020 covers EP. As it turns out the question she should have asked first was - are you ready Jonah? Swilley, the lone musician on the London stage, got two songs in before having to, "embarrassingly", have to ask the audience if anyone could provide him with a plectrum for his guitar! Luckily, and to his relief and delight, one was quickly made available to him and the show went on uninterrupted. "You're the one we've been waiting for said Brown" as she and her co-creative force delivered an imaginative set to the biggest crowd in Mattiel's current run of gigs. 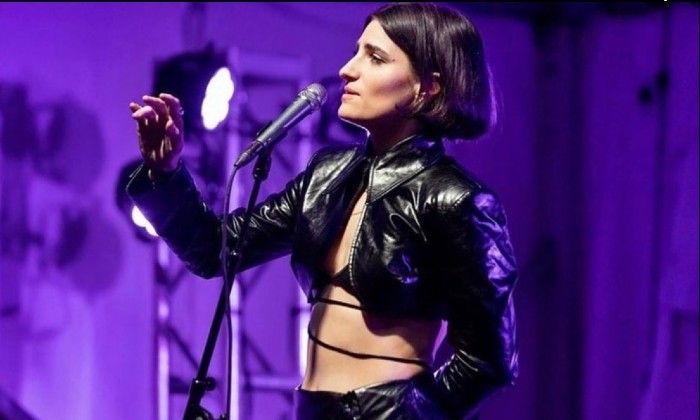 Singer Atina Mattiel Brown and guitarist Jonah Swilley were joined on stage by a projector and a box of tricks that contained all the beats and backing tracks they needed to enhance the duo's sound. Atina was dressed throughout in her signature knee high black heeled boots, cut away three quarter length black (p)leather thigh tied skirt, black bra and figure hugging long sleeve black Bolero jacket. Jonah, bare chested but for his coordinating (p)leather waistcoat and trousers, provided the licks and riffs that have come to define Mattiel's retro leaning sound whilst Brown delivered her distinctive quivering vocal in front of a packed out crowd in the capital. "London's kinda the first place that gave us a chance, so thanks for that" - Atina said.

The lead single from their latest album, 'Georgia Gothic', got an enthralling evening underway as images of Brown's one time secret crush, Jeff Goldblum, were projected onto the brick wall behind them as they played the song named in his honour. The wonderful USP of Brown's vibrating vocal captured the audience from the off as she sang - "He came and met me in the bathroom, A little like a younger Jeff Goldblum, About to take my heart and break it pretty soon". 'Baby Brother', a track lifted from the band's 2017 eponymous debut album, was up next followed by - 'Je Ne Me Connais Pas', the final single from their second album - 'Satis Factory'.

Three tracks in to the evening and already all three of Mattiel's albums had been featured. Brown and Swilley, playing in front of a partisan crowd that included people from their record label - Heavenly Recordings, were now getting into their stride and clearly beginning to enjoy the night themselves. Both the lead singer, Brown, and guitarist, Swilley, had appeared on BBC 6 Music's RadMac show earlier in the morning, and both had expressed their excitement about playing to the sold out crowd at Lafayette. A 6 Music favourite, featuring on heavy rotation earlier in the year, 'Lighthouse' was the second track to be played from Mattiel's new album. The up-beat, sing-a-long toe tapper transferred brilliantly into a live environment as the energy in the room began to grow.

'You Can Have It All', infused with a subtle slice of 60's psychedelia, and 'How It Ends', with it's deftly arranged staccato beat, saw to it that the audience were, for the most part, transfixed by Mattiel's performance. Further in to the set Mattiel played their last two single releases, 'Blood In The Yolk', and their most recent, 'Cultural Criminal', as well as a feisty version 'Food For Thought' and an edgy rendition of 'Heck Fire'.

With a 23 track setlist it is possibly not unsurprising that their were a couple of moments during the evening where momentum dropped. 'Millionaire', and 'Populonia', sequential tracks on 'Satis Factory', did not come across as well as they could have.

Whilst the energy levels may have dipped temporarily they certainly didn't detract from a very good performance. Saving their best until the very last, Mattiel finished the main set with a cracking take on 'Whites Of Their Eyes' and an evocative, atmospheric performance of 'Count Your Blessings'.

With the crowd now pumped up and fully engaged it wasn't long before Atina and Jonah reappeared on stage for their encore. To the delight of the audience Mattiel began their semi-acoustic second set, Jonah having swapped out his guitar, with the iconic Clash song - 'Guns Of Brixton'. Brown's voice, coupled with the dub beat and Swilley's strumming skills, make a great combination delivering up a top drawer cover. 'Send It Over', the first track that the pair wrote together, and finally a harmonic clap-a-long - 'Keep The Change' further helped to round off a very entertaining evening.