Delta Deep is a hard rocking, blues composite band from Southern California.  Their self-titled album contains elemental songs; some that just kick ass from the first chord to others that display the pyrotechnic blues of Johnny Winter, while still others ooze slowly, like Velveeta cheese. 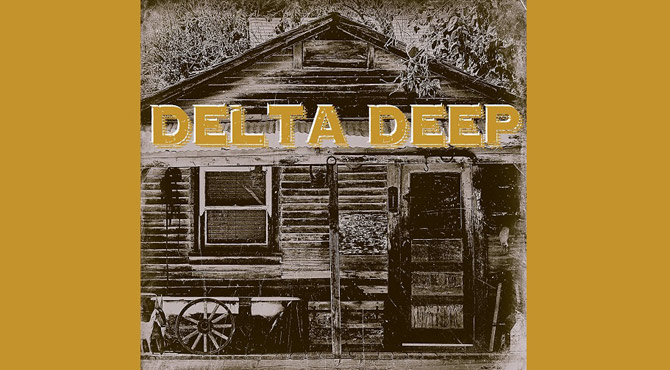 Delta Deep is a composite band because it's one of those bands whose members all had previous incarnations with other famous bands.  Phil Collen, of Def Leppard fame, plays guitars on the album, and demonstrates some mean licks.  The bass guitarist is Robert DeLeo, from Stone Temple Pilots.  "In the pocket" is Forrest Robinson, who drummed for Engelbert Humperdinck and Joe Sample & The Crusaders.  And the vocalist is Debbi Blackwell-Cook, who sang background vocals for Michael Buble and Gregory Hines.

Blackwell-Cook deserves special mention.  The woman can sing!  She growls and projects with elusive familiarity, a familiarity that harks back to the glory days of Janis Joplin mixed with the vocal convulsions of today's queen of vocal bulge, Lizzy Hale of Halestorm.  In fact, Blackwell-Cook's voice does everything Hale's does, but with more soul.  And tune in to this:  Blackwell-Cook is 62-years old.

The album encompasses eleven tracks, starting off with 'Bang The Lid', a shaking rockabilly tune that is heavy with Collen's guitar work.  Next up is 'Whiskey', a blues song that pitches and rolls like a dinghy in stormy seas.  Blackwell-Cook's vocals are good, but for some reason her phrasing is off, which makes the song sound forced.

'Down The Delta' is the prize of the album.  A hard rocker, with definite Def Leppard influences; listeners keep waiting for Joe Elliott to jump in.  Instead, they get Blackwell-Cook, who does an excellent job.  The heaviest blues tune on the album is 'Miss Me', a song that would not be out of place on Johnny Winter's 'Still Alive and Well'.  The other true blues tune is 'Burnt Sally', which exposes Collen's grinding, tortured guitar riffs, along with Blackwell-Cook's pressurized vocals.

'Shuffle Sweet', another Def Leppard-like song, is a straight-ahead rocker with Collen and Blackwell-Cook providing a tasteful duet.  The last track, 'Mistreated', features the vocals of Joe Elliott and Blackwell-Cook and, despite the lyrics, is a nice treat.

The majority of the songs on Delta Deep were written by Phil Collen, his wife Helen, and Debbi Blackwell-Cook.  The result of the trio's efforts is a conglomeration of various traditions and influences:  Janis Joplin, Led Zeppelin, Def Leppard and Humble Pie.  And the result is an assortment of songs that eschew an isolated "sound."  Hopefully, Delta Deep won't be the band's only release.