Posted in Press Releases on 07 November 2013 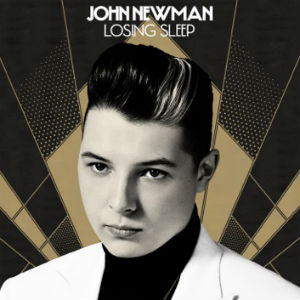 24 year old rising star John Newman whose critically acclaimed debut album "Tribute", stormed into the UK chart at no. 1 last week beating the likes of Paul McCartney, Pearl Jam and Cher to the top spot, has his brand new single "Losing Sleep", released on December 16th through Island Records. Newman finishes his first sell-out UK tour this week and has just announced a second major UK tour for January/February 2014 with the first Shepherd's Bush date selling out in minutes and a second already added.

"Losing Sleep" follows John's two previous singles, "Love Me Again" contender for song of the year, and massive Global smash - no. 1 in 20 countries, and equally rousing follow-up "Cheating". Indeed "Love Me Again" has sold over 1 million singles worldwide, is certified GOLD in 7 countries, was Top 10 for 6 weeks and still remains in the UK Top 30 14 weeks after release All three songs are taken from "Tribute", an album which confirms the Yorkshire-man's class as a songwriter, peerless power as a vocalist and offers conclusive proof that the UK has a singular new talent in its midst. Not to mention John's previous anthem and chart-topper "Feel The Love", the follow-up "Not Giving In" both of which he co-wrote and fronted with Rudimental.

Hailing from Settle in the Yorkshire Dales, and possessing a voice that has been compared to some of the soul greats, Newman began playing guitar and writing his own songs aged just 14 and soon learned how to record and produce himself, making his own house tracks and DJing. A few years later and all the influences start to stack up to form the basis of John's sound. Think the pure soul and groove of early Stax and Motown, add a dash of James Brown and Prince, a smattering of Black Keys, and mix it all together with a bit of Dangermouse. It's all in there, it's all great, but what really hits you is the voice. That Voice.

This collection of eleven self-penned songs illustrates that behind that amazing voice lies a rare and exciting artist who is ready to claim his place at the top table.