Review of Next Year In Zion Album by Herman Dune

Review of Herman Dune's album 'Next Year In Zion' released through City Slang. 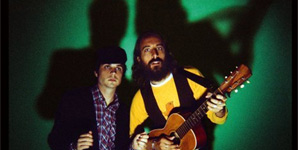 Equal parts French and Swiss but based in New York duo Herman Dune have been making intelligent, slightly whimsical and entirely off the scale folk music for almost a decade now, and despite never really enjoying the commercial success that their critical acclaim has perhaps merited, 'Next Year In Zion' is actually their tenth album this side of the Millennium.

Whereas their work from the outset may have been viewed by some - John Peel being one - as being groundbreaking, they appear to have fallen into an age-old trap of reproducing what is expected of them rather than pushing their wares to the next level, and although the contributions from the likes of Wave Picture David Tattersall, Berg Sans Nipple's El Doctor Schonberg and The Babyskins' Crystal Madrilejos and Angela Carlucci at least offer something slightly more incisive than on 2006's disappointing 'Giant', one still gets the feeling that Herman Dune have played things reasonably safe here.

A melancholic country feel lingers throughout 'Next Year In Zion''s twelve tracks and although the title track and 'My Best Kiss' both amply shake its dour spectre away, the looming presence of Hank Williams shadow casts an ominous presence that sadly eliminates this record of any identity, which is sad considering David-Ivar and Neman's vast array of talent not to mention highly revered back catalogue of work.

Its highly unlikely that 'Next Year In Zion' will win them many new fans and if anything, suggests percussionist Neman's Zombie Zombie project is a more viable source of inspiration as to where his future musical direction may lay.

Disappointing then, but maybe not unexpected.

Herman Dune - Next Year In Zion