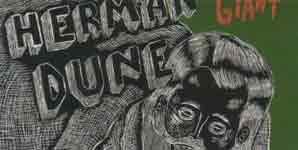 The late John Peel was a massive Herman Dune fan, so much so, that he invited them for a mammoth 12 Peel sessions. Despite the backing from one of music's most loved & influential figures and an extraordinary backlog of impressive previous releases, Herman Dune remain relatively (and somewhat surprisingly) unknown.

The core of the group consists of 3 family members, David Herman Dune, André Herman Dune, and Neman Herman Dune, and although primarily from Sweden, The band also have roots in France and the USA (and just to confuse things further they recorded the album in North Wales). The album was actually released in some parts of Europe in October last year & even saw a November release in the US, though Britain has had to wait up until February.

Giant consists of carefully layered percussive rhythms, acoustic guitar, plucked ukulele and a combination of woodwind, horn & brass accompaniment. The lyrics are often of a narrative angle, cast with healthy doses of humour, romance, intelligence and an undeniable warmth. The overall sound is refreshingly original, yet still regains an incredibly authentic flavour, It's basically a luscious melting pot of beautiful multi-continental influences and the perfect way to spend those lazy Sunday afternoons.

Stand out songs include the ironic French flavour in 'Bristol', The gentle African rhythm & sweet vocal harmonies in "No Master", the hilarious 'Your Name/My Game' which revolves around 'Shouting your name' & 'Shit scared of a tiny flame', and finally the breathtaking title-track 'Giant' which features the lyrics: 'My hands are strong enough to kill/ There's no way, cos there's no will/ I'm a giant on a dwarfs shoulder/ which culminates in the spine-chilling harmonised vocal: 'And the night. it only gets colder'. The song is met with spellbinding plucked ukulele, ticking percussion, and a delightful Eastern European touch with horns & brass.

Having only recently finished compiling my top 10 for 2006, I hate to talk about best records of 2007 so early into the year, but it would be wrong not to put this one forward. Finally, Giant is probably best summed up with two words.Quite exceptional.

Herman Dune - Next Year In Zion