Review of Mathletics Single by Foals 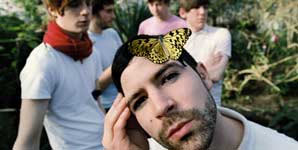 The continuing story of Foals is one to tell any band starting out on a journey of discovery with no real idea of where they're going to end up.

When their self-produced debut release came out just over a year ago, they seemed like a band stuck between a (post)rock and a hard(core dance) place. Back then, Foals looked like a band on a perennial 60-40 split, with the floating member going back and forth dependent on season, sensibility or just plain state of mind.

Fast-forward to summer 2007 and Foals have almost certainly found their identity. Although 'Mathletics' isn't quite the finished article, it is a healthy departure from those early days supporting the likes of Youthmovies around Oxford and is pretty much unrecognisable even from the recent white label 12 inch live version that now goes for silly money on eBay.

With traces of Bloc Party jerkiness combined with The Rapture's dance moves, this is about as exciting a piece of floor-filling pop as you're likely to hear all year.

Its flipside 'Big Big Love' isn't half bad either, acting as the lead track's post-club comedown as chiming guitar loops merge into a stuttering rhythm that eventually grinds to a halt, just in time for bed.

Not quite genius, but at last measuring up to all the hype.