The director of Wedding Crashers and writers of The Hangover get together for a body-swap comedy that's as vulgar as you'd expect. But it also dips oddly into moralising slush, which kind of undermines any expected laugh fest. 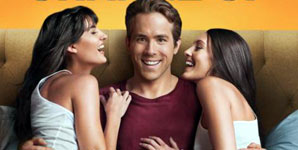 While Dave (Bateman) has become a successful lawyer, complete with gorgeous wife Jamie (Mann) and three kids, his childhood friend Mitch (Reynolds) is living like a slacker with a string of random women. One night they wish they had each other's life and the next morning they wake up in each other's skin.

Of course, after the initial wackiness, Mitch is going to have to learn how to take Dave's responsibilities seriously, while Dave will need to discover how to relax and live a little. But how can they return to their own bodies?

After opening with an outrageously gag-inducing gross-out scene, the film slips quickly into gently goofy slapstick for most of its running time. The filmmakers hint that they might push some boundaries and stretch the characters, but they never actually take things in a challenging direction.

Instead, they merely coast along on the charm of their cast members and the undemanding nature of their target audience.

Strangely, Mitch is such an annoying idiot that we can't understand why Dave is his friend. And Reynolds plays him like a broad cartoon character, so we're actually relieved when they switch bodies: Bateman's everyman charm gives Mitch the humanity he lacked, while Reynolds brings some sex-appeal to the too-focussed family man. Meanwhile, both develop strong chemistry with Mann and Wilde (as Dave's hot colleague and perhaps the film's most complex character), but the script doesn't demand anything more of the actors.

While some of the dialog is sharp and silly, director Dobkin overplays everything in an attempt to punch the humour, and as a result it's never much more than mildly amusing beyond the constant string of vulgar jokes. So it feels like a letdown when the film veers suddenly into sweet sentimentality just when it needs to ramp up the comical stakes. And even though it's enjoyably watchable, the preachy final act feels like it was pasted on from another movie altogether.