Writer-director Shane Black returns to the comedy-noir vibe of his 2005 hit Kiss Kiss Bang Bang with this riotously funny thriller set in late-1970s Los Angeles. It's an entertaining mix of hilarious action mayhem, slapstick and violence anchored by Ryan Gosling and Russell Crowe, who unexpectedly prove to be a superb comedy double-act. 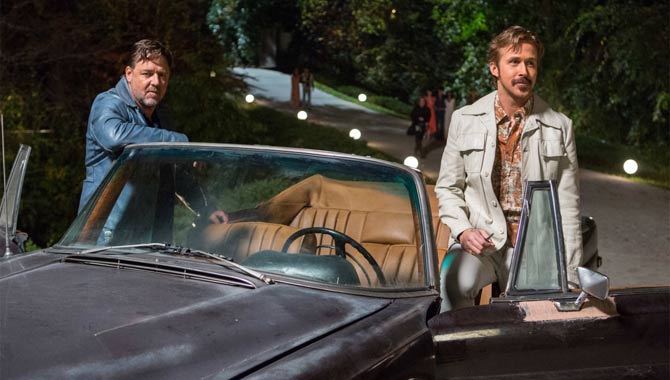 It's 1977, and private detective Holland (Gosling) is searching for a porn star who was spotted alive after dying in a car crash. His investigation leads him to Amelia (Margaret Qualley), who has hired the thug Jackson (Crowe) to keep people off her tail. After beating up Holland, Jackson realises that maybe they should be working together, as other cases seem to be dovetailing around Amelia's politically powerful mother (Kim Basinger). But now Holland and Jackson are being chased by the legendary assassin John Boy (Matt Bomer). And Holland is having a terrible time keeping his bright 13-year-old daughter Holly (Angourie Rice) from getting involved in this dangerous case.

Gosling and Crowe play Holland and Jackson as a classic comedy duo along the lines of Abbott and Costello or Hope and Crosby: bumbling idiots who somehow manage to save the day due to dumb luck and someone smart looking out for them. In this case, their guardian angel is Holly, and young Aussie actress Rice more than holds her own against these A-list stars. Holly is the only person on-screen who has a clue what's actually going on, and Rice effortlessly walks off with the film, giving a knowing performance that's hugely engaging. The other scene-stealer is Bomer, whose slick, overconfident killer is simply screaming to be taken down a peg or two.

Black fills the movie with amusing action sequences that are expertly staged to look messy and desperate. Each chase and fight crackles with visual and verbal wit, while the entire film has a terrific stream of random gags that continually catch the audience off guard while sending the plot off in new directions. The period details are enjoyably colourful, although some of the sexist attitudes of the time seem to have wormed their way into Black's own subconscious (the porn industry is basically a colourful joke, while women are mainly naked). There are some hints at bigger, more meaningful themes in the way the story swirls around politicians and corporations conniving against the environment, but Black's intention isn't to make a point. It seems more likely that he's trying to launch a franchise. And no one would mind spending more time with these guys.

Watch the trailer for The Nice Guys: