To launch their new Dark Universe franchise, Universal has taken an approach that mixes murky visuals with exaggerated action. It's certainly nothing like the involving classic monster movies they're trying to reignite, such as the 1932 Boris Karloff classic The Mummy. But this movie has more in common with Tom Cruise's Mission: Impossible and Jack Reacher blockbusters, with added swimming zombies. 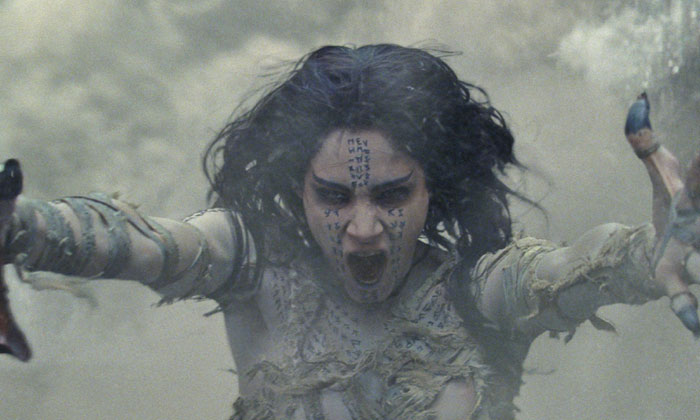 Cruise plays Nick, an American army officer and mercenary who with his cohort Vail (Jake Johnson) has just located a long-lost burial site deep in Daesh-controlled Iraq. Somehow, the hot archaeologist Jenny (Annabelle Wallis) arrives immediately to stop him from plundering this tomb. It turns out that the sarcophagus contains the remains of ancient Egyptian Princess Ahmanet (Sofia Boutella), who was mummified alive for making a pact with the evil god Set and then murdering her father and brother. Now transported to London, she returns to life with a vengeance, casting a spell on Nick to help reassemble Set's dagger and finish her nefarious plan. So Jenny turns to her deeply unstable boss Henry Jekyll (Russell Crowe) for help.

There's rather a lot of mythology building going on here, setting things up for the further adventures of Jekyll's secret society, which is trying to deal with ancient evil like a mash-up of Men in Black and Night at the Museum. Without the humour. There are some throwaway gags here and there, but director Alex Kurtzman stages everything with a gloomy sense of foreboding that simply never gains traction. The thin plot seems constructed merely to connect a series of enormous action set-pieces, which are all very well choreographed but never remotely exciting. It doesn't help that everything on-screen has been extravagantly over-designed, with cavernous sets that have been made deliberately dark and sooty. But this leaves the entire movie feeling artificial, random mayhem in fake places.

That said, it's impossible to deny the Cruise factor. He's such a magnetic presence that he can even turn this thieving low-life womaniser into a charming rogue. And the filmmakers know his value as a performer, throwing into wildly energetic stuntwork at every opportunity. So it doesn't matter that he fails to generate even a hint of chemistry with the two supermodels cast opposite him; poor Wallis and Boutella have little to do but look ridiculously lithe and sexy, although they at least try to create feisty characters. And Crowe has some fun when Jekyll's alter-ego Hyde makes an appearance. But really, to make this franchise work, the filmmakers need to lighten up and create more organic stories that entertain us while giving us a real fright.

Watch the trailer, clips and featurettes for The Mummy: