At 80 years old, British filmmaker Ken Loach won his second Cannes Film Festival with this warmly involving rant against government bureaucracy. The film takes a blackly comical approach, gripping the audience as its engaging characters take on a system that seems utterly devoid of compassion. And by remaining centred on the people rather than the message, the film is involving and important. 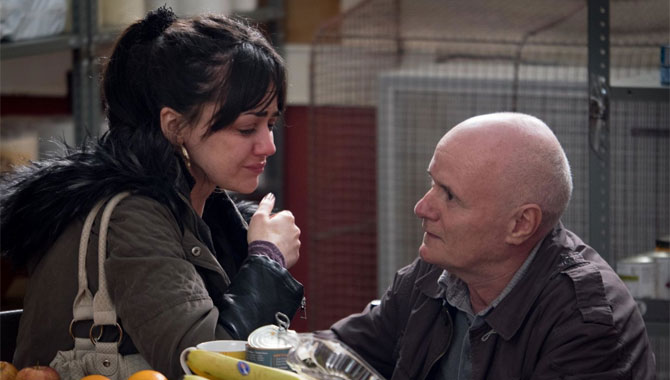 Set in Newcastle, the story centres on Dan (Dave Johns), a carpenter in his late 50s who is recovering from a heart attack. His doctor says he's not ready to return to work, but the disability office, which is run by a private company, stops his payments because they think he looks perfectly healthy. He appeals this cold-hearted decision, but is now stuck in limbo while he waits for his case to be heard. Along the way, he meets Katie (Hayley Squires), a young woman struggling to take care of her two young children (Briana Shann and Dylan McKiernan) because new regulations are making it impossible for her to get the help she needs to get back on her feet.

Both Dan and Katie are caught in impossible situations, so they band together to help each other out and take on the system. But the rules keep changing, and neither the government employees nor private contractors offer any understanding at all. This lack of general human respect is infuriating to watch, especially as they force needy people to jump through a series of increasingly impossible hoops. Both Johns and Squires are likeable and energetic, adding earthy humour and righteous anger to each scene. And there are several side characters who bring various layers of texture to their stories. These people are all far from perfect, but at least most of them are trying to make the best of a bad situation.

Loach makes movies that are refreshingly honest in their approach and unflinching in their reaction to injustice. Even though some people are far more heartless than others, there isn't a villain here. It's the system that's the problem, namely a right wing government that slashes services so they're on the verge of failure and then shifts the blame back onto the most vulnerable people in society. In Brexit-era Britain, this story has even more ramifications because the neediest people actually voted for the politicians who are destroying their lives. But this is the same in Trump-era America. And this film's salient point is that we need to remember that these are human beings in need of compassion, but officials prefer to waste money by treating them with cruelty.

Watch the trailer for I, Daniel Blake: