DWAYNE 'THE ROCK' JOHNSON Rues The Day He Bought A Co-star A Designer Watch To Apologise For Accidentally Punching Him In A Fight Scene, Because Other Actors Now Try To Get Injured For A Free Rolex. 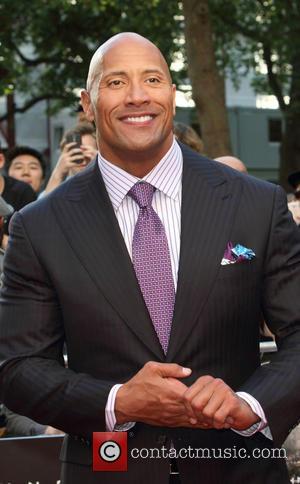 Picture: Dwayne Johnson - A host of stars were photographed as they arrived for the World Premiere of 'San Andreas' which was held at the Odeon...

The actor was shooting a brutal brawl with The Green Mile star Michael Clarke Duncan for their 2002 action movie The Scorpion King when he caught his colleague with a hefty blow, sending him sprawling unconscious to the floor.

Johnson felt so guilty he purchased a custom-made Rolex as an apology to the late actor, but once the story got out he suddenly noticed others were trying to get punched by him in every fight scene he shot.

Johnson tells U.K. talk show host Graham Norton, "When I was in The Scorpion King I wound up hitting (him), I clocked him really hard and he went down. I felt so bad I bought him a Rolex watch. I did notice, when the story got out, that guys would lean in a little close for a punch!"